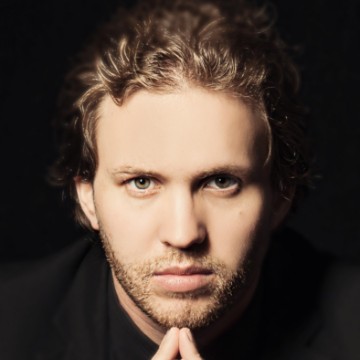 Described by "The Herald" as "extremely good, concise, clear, incisive and= expressive", David Danzmayr is widely regarded as one of the most talented and exciting European conductors of his generation.

Danzmayr is Chief Conductor of the Zagreb Philharmonic Orchestra, the first to hold this title in seven years. As leader of this orchestra, he is following in the footsteps of famous conductors like Lovro von Matacic, Kazushi Ono and Dmitri Kitajenko. Last season, he led the orchestra in a highly successful tour to the Salzburg Festspielhaus where they performed the prestigious New Year’s concert and were immediately re-invited to perform in future seasons.

In the US, David is Music Director of the ProMusica Chamber Orchestra, where his contract was recently extended, as well as the Artistic Advisor of the Breckenridge Music Festival.

Previously, David Danzmayr served as Music Director of the Illinois Philharmonic Orchestra in Chicago, where he was lauded regularly by both the Chicago Tribune and Chicago Classical Review for the performances. He was also the only conductor in the Chicago area who programmed a piece of American music on every concert.

David frequently appears in the world ́s major concert halls, such as the Musikverein and Konzerthaus in Vienna, Grosses Festspielhaus Salzburg, Usher Hall Edinburgh and the Symphony Hall in Chicago.

He has served as Assistant Conductor of the Royal Scottish National Orchestra, which he conducted in more than 70 concerts so far, performing in all the major Scottish concert halls and in the prestigious Orkney-based St Magnus Festival. He has regularly been re-invited to the podium since then.

David Danzmayr received his musical training at the University Mozarteum in Salzburg where, after initially studying piano, he went on to study conducting in the class of Dennis Russell Davies. He finished his studies with the highest honours.

David was strongly influenced by Pierre Boulez and Claudio Abbado in his time as conducting stipendiate of the Gustav Mahler Youth Orchestra and by Leif Segerstam during his additional studies in the conducting class at the Sibelius Academy. Subsequently, he gained significant experience as assistant to Neeme Järvi, Stephane Deneve, Carlos Kalmar, Sir Andrew Davies and Pierre Boulez, who entrusted Danzmayr with the preparatory rehearsals for his own music.