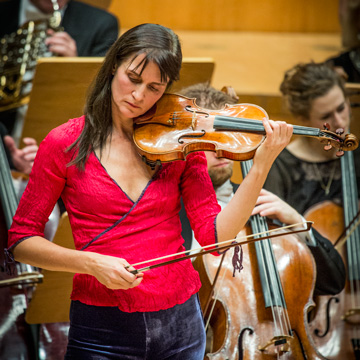 Viktoria Mullova studied at the Central Music School of Moscow and the Moscow Conservatoire. Her extraordinary talent captured international attention when she won first prize at the 1980 Sibelius Competition in Helsinki and the Gold Medal at the Tchaikovsky Competition in 1982 which was followed, in 1983, by her dramatic and much publicized defection to the West. She has since appeared with most of the world’s greatest orchestras and conductors and at the major international festivals. She is now known the world over as a violinist of exceptional versatility and musical integrity. Her curiosity spans the breadth of musical development from baroque and classical right up to the most contemporary influences from the world of fusion and experimental music.

Her interest in the authentic approach has led to collaborations with period instrument bands such as the Orchestra of the Age of Enlightenment, Il Giardino Armonico, Venice Baroque and Orchestre Révolutionaire et Romantique. Viktoria has a great affinity with Bach and his work makes up a large part of her recording catalogue. Her interpretations of Bach have been acclaimed worldwide and led Tim Ashley to write, “To hear Mullova play Bach is, simply, one of the greatest things you can experience…” in the Guardian. Her recent disc of Bach Concerti with the Accademia Bizantina and Ottavio Dantone has been highly praised and her recording of Bach’s solo sonatas and partitas represents a significant milestone in Viktoria’s personal journey into this music. The recording received 5-star reviews from all over the world and she has embarked on an international several season-long, series of solo Bach recitals.

Her ventures into creative contemporary music started in 2000 with her album “Through the Looking Glass” in which she played world, jazz and pop music arranged for her by Matthew Barley. This exploration continued with her second album ‘The Peasant Girl’ which she has toured around the world with the Matthew Barley ensemble. This project shows a different side to Viktoria as she looks to her peasant roots in the Ukraine and explores the influence of gypsy music on the classical and jazz genres in the 20th Century. Her most recent project, “Stradivarius in Rio” is inspired by her love of Brazilian songs by composers such as Antonio Carlos Jobim, Caetano Veloso and Claudio Nucci. A CD of the same name has been enthusiastically received and she is now presenting the project in planned concerts throughout Europe. As well as her own projects, she has also commissioned works from young composers such as Fraser Trainer, Thomas Larcher and Dai Fujikura.

This season, Viktoria performs Classical and Romantic repertoire with a number of major orchestras and conductors. Highlights include performances with cellist Matthew Barley of Dusapin’s “At swim - Two birds” with Seattle Symphony Orchestra (Ludovic Morlot) and London Philharmonic Orchestra (Andrés Orozco-Estrada). This piece is a co-commission between these orchestras and Netherlands Radio Philharmonic Orchestra (world premiere), Orchestra Sinfonica Nazionale RAI, Gewandhausorchester and Orchestre National de France, with performances taking place last season. She is Artist in Residence at The Sage, Gateshead, appearing in recital, concerto and with her ‘Stradivarius in Rio’ programme, where she is joined by Matthew Barley, Paul Clarvis and João Luís Nogueira Pinto. She gives solo recitals in Japan, China and the UK, alternating between two violins in the same programme, with gut strings for Bach and metal strings for contemporary music. With Katia Labèque, she performs in recital at Edinburgh Festival and starts new collaborations with fortepianist Alasdair Beatson, playing Beethoven Sonatas on gut strings, and with the double bass player, jazz musician and composer, Misha Mullov-Abbado, with whom she is touring and performing their ‘Music we Love’ programme.

Mullova’s extensive discography for Philips Classics and Onyx Classics has attracted many prestigious awards. Her recording of the Vivaldi Concertos with Il Giardino Armonico and directed by Giovanni Antonini, won the Diapason D’Or of the Year award for 2005 and her recording featuring Beethoven’s Op.12, No.3 and Kreutzer Sonatas with Kristian Bezuidenhout won immense critical acclaim. Other discs have included the Schubert Octet with the Mullova Ensemble, “Recital” with Katia Labèque, Bach Sonatas with Ottavio Dantone and “6 Solo Sonatas and Partitas” by JS Bach. Mullova’s most recent all-Prokofiev disc (released in August 2015) has already received critical acclaim. September 2018 sees the release of her new CD of the complete works for violin & orchestra by Arvo Pärt with the Estonian National Symphony Orchestra and Paavo Järvi for the Onyx label, which coincides with a major interview in Gramophone Magazine.

Viktoria either plays on her ‘Jules Falk’ 1723 Stradivarius or a Guadagnini violin.