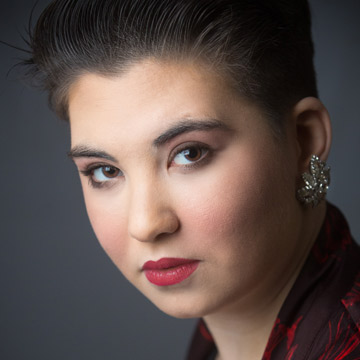 Hayley Abramowitz, soprano, is dually based in the DC-metro area and Bloomington, Indiana. This May, she will receive her Master of Music in Voice from the Jacobs School of Music, where she studies with Carol Vaness. Most recently at Jacobs, Mx. Abramowitz appeared as Nella in Gianni Schicchi, and as a Flowermaiden in IU Opera Theater’s bicentennial production of Parsifal.

These performances of Mahler’s 4th symphony mark Ms. Abramowitz’s professional debut. Previously at the BSO, she has appeared with the University of Maryland Concert Choir in several choral performances. Later this season, she will join the Ojai Music Festival to perform Steve Reich’s Tehillim.

This past summer, Ms. Abramowitz studied at the American Bach Soloists Academy. There, she sang the role of Erato in Handel’s Terpsicore, and performed arias and chamber music as part of the Academy’s Baroque Marathon concerts.

Last season, Ms. Abramowitz appeared as Clio in the second American performance of Handel’s little-known serenata, Parnasso in festa, under the baton of Jeffrey Thomas. She also gave her first Master’s recital, featuring selections from Strauss’s Brentano Lieder and a world premiere for composer and dear friend William Kenlon. Ms. Abramowitz is a passionate advocate of new music. She has given numerous world premieres in the last several years.