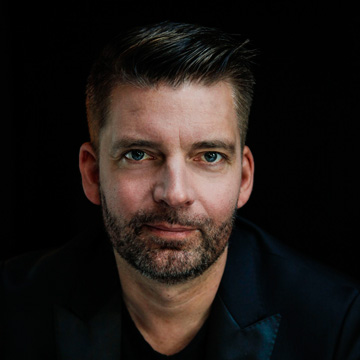 Matthias Pintscher is the Music Director of the Ensemble Intercontemporain, the world’s leading contemporary music ensemble founded by Pierre Boulez. In addition to a robust concert season in Paris, he tours extensively with them throughout Europe, Asia, and the United States, this season leading concerts in Berlin, Hamburg and Zurich. Known equally as one of today’s foremost composers, Mr. Pintscher will have two works premiered in the 2018/19 season: Nur, a new concerto for piano and ensemble will be performed by Daniel Barenboim and the Boulez Ensemble conducted by the composer in January; and a new work for baritone, chorus, and orchestra will performed by Dietrich Henschel and the Tonhalle-Orchester Zürich conducted by maestro Kent Nagano in June.

Mr. Pintscher is the 2018/19 Season Creative Chair for the Tonhalle-Orchester Zürich, the Artist-in-Residence at the Los Angeles Chamber Orchestra and finishes a nine-year term as the BBC Scottish Symphony Orchestra’s Artist-in-Association. This season, Pintscher makes his debuts with the Saint Louis Symphony Orchestra, Rotterdam Philharmonic, and the Staatsoper Unter den Linden in Berlin, where he conducts the world premiere of Violetter Schnee, a new opera by Beat Furrer. Return guest engagements include the symphony orchestras of Chicago, Cincinnati, Cleveland, Indianapolis, Milwaukee, the New York Philharmonic, as well as the New World Symphony in Miami. In Europe, having begun the season conducting the Scottish Chamber Orchestra at the Edinburgh International Festival, Pintscher also returns to the Orchestre de Paris, Danish National Symphony Orchestra and Helsinki Philharmonic.

In the 2017/18 season, Mr. Pintscher made several significant debuts with the Royal Concertgebouw Orchestra, London Symphony Orchestra, Berlin Radio Symphony, Finnish Radio Symphony and the Gulbenkian Orchestra in Lisbon. Pintscher and the Ensemble Intercontemporain brought an ambitious presentation of Pierre Boulez’s Répons to the Park Avenue Armory in New York and performed a number of concerts on tour in London (Royal Festival Hall), Vienna (Konzerthaus) and Cologne (Philharmonie). In addition, they were joined by alumni of the Lucerne Festival Academy Orchestra in a special multi-media Messiaen project performed in four cities. Other guest engagements in the 17/18 season included the Los Angeles Philharmonic in both a subscription week and at the Hollywood Bowl, Atlanta Symphony Orchestra, Utah Symphony, Saint Paul Chamber Orchestra (where he premiered Salvatore Sciarrino’s new piano concerto with Jonathan Biss), Orchestre de la Suisse Romande, Frankfurt Radio Symphony and the Mahler Chamber Orchestra conducting Beethoven’s Ninth Symphony. An enthusiastic supporter of and mentor to students and young musicians, Pintscher served as Principal Conductor of the Lucerne Festival Academy Orchestra from 2016-2018 and worked with the Karajan Academy of the Berlin Philharmonic in their 2017/18 season, culminating in a concert at the Philharmonie.

Matthias Pintscher began his musical training in conducting, studying with Peter Eötvös in his early twenties, during which time composing soon took a more prominent role in his life. He rapidly gained critical acclaim in both areas of activity and continues to compose in addition to his conducting career. As a composer, Pintscher's music is championed by some of today's finest performing artists, orchestras and conductors. His works have been performed by such orchestras as the Chicago Symphony, Cleveland Orchestra, New York Philharmonic, Philadelphia Orchestra, Berlin Philharmonic, London Symphony Orchestra and the Orchestre de Paris, among others. Bärenreiter is his exclusive publisher, and recordings of his compositions can be found on Kairos, EMI, Teldec, Wergo and Winter & Winter. Pintscher has been on the composition faculty of the Juilliard School since 2014.