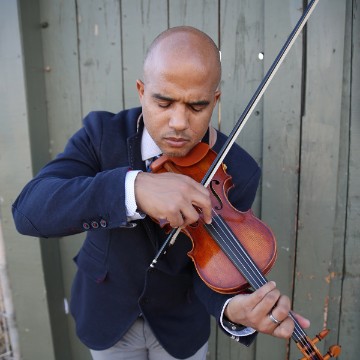 Daniel Bernard Roumain’s acclaimed work as a composer and performer spans more than two decades, and has been commissioned by venerable artists and institutions worldwide. “About as omnivorous as a contemporary artist gets” (New York Times), DBR is perhaps the only composer whose collaborations traverse the worlds of Philip Glass, Bill T. Jones, Savion Glover and Lady Gaga.

Known for his signature violin sounds infused with a myriad of electronic and urban music influences, DBR takes his genre-bending music beyond the proscenium. He has been nominated for an EMMY for Outstanding Musical Composition for his work with ESPN; featured as keynote performer at technology conferences; and written large scale, site-specific music for public parks.

DBR’s made his Carnegie Hall debut in 2000 with the American Composers Orchestra performing his Harlem Essay for Orchestra, a Whitaker commission. He went on to compose works for the Boston Pops Orchestra; Carnegie Hall; the Library of Congress; the Stuttgart Symphony, and myriad others.

DBR’s commitment to arts education has garnered long-term relationships with countless universities, orchestras, and performing arts centers.  DBR earned his doctorate in Music Composition from the University of Michigan. He is currently Institute Professor of Practice at Arizona State University.

An avid arts industry leader, DBR serves on the board of directors of the League of American Orchestras, Association of Performing Arts Presenters and Creative Capital, the advisory committee of the Sphinx Organization, and was co-chair of 2015 and 2016 APAP Conferences.

DBR recently premiered We Shall Not Be Moved, a chamber opera co-commissioned by Opera Philadelphia and Apollo Theater, with libretto by Marc Bamuthi Joseph, and direction by Bill T. Jones. New York Times called the work "The Best Classical Performance of 2017."