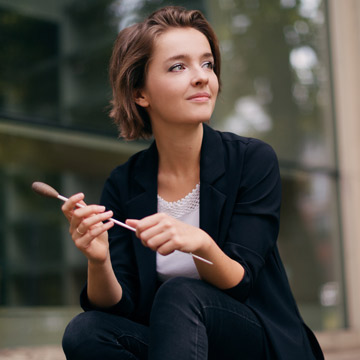 She starts this season her two-year appointment as Assistant Conductor at the Boston Symphony Orchestra, becoming the second woman assistant conductor in the BSO’s history.

In addition to her position in Boston, Anna Rakitina is also one of the 19/20 Dudamel Fellows at the Los Angeles Philharmonic. Under the supervision of the orchestra’s Music and Artistic Director, Gustavo Dudamel, she will conduct the LA Phil youth concerts at the Walt Disney Concert Hall and develop her craft through her involvement in the LA Phil’s orchestral, education and community programs such as the Youth Orchestra of Los Angeles (YOLA).

Born in Moscow, Anna Rakitina began her musical education as a violin player, continuing her conducting studies at the Moscow Tchaikovsky Conservatory with Prof. Stanislav Diachenko. From 2016 to 2018 she pursued her postgraduate studies at the Hamburg Hochschule für Musik und Theater with Prof. Ulrich Windfuhr, writing her PhD thesis about Rachmaninov.

She has also taken part in the Lucerne Academy Masterclasses, led by Alan Gilbert in 2016 and Bernard Haitink in 2017. Other mentors that have greatly influenced her are Gennadiy Rozhdestvensky, Vladimir Jurowski and Johannes Schlaefli.

A passionate of opera, Anna conducted during her studies such productions as Eugene Onegin, Iolanta, Aleko and The Rape of Lucretia, among others.

Rakitina is also a proud founder, alongside Mtro. Sergei Akimov, of the chamber orchestra “Affrettando”, comprised by highly professional musicians, which is based in Moscow.