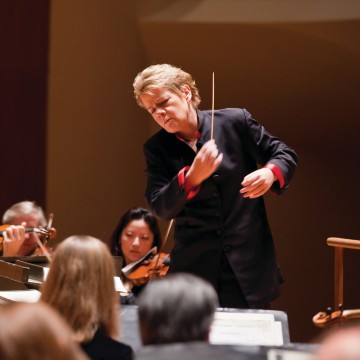 In honor of Beethoven’s 250th birthday, Marin Alsop opens the season with a semi-staged concert of the composer’s only opera, Fidelio, with its story of a heroic woman’s rescue of her unjustly imprisoned husband, updated to today’s America. In Heartbeat Opera's critically-acclaimed adaptation, a black activist is wrongfully incarcerated, and his wife disguises herself to infiltrate the system and free him. The moving Prisoner’s Chorus is performed on video by more than one hundred incarcerated singers from six prison choirs. The New Yorker’s Alex Ross called director Ethan Heard's original production “imaginative, vital and heartbreaking.”