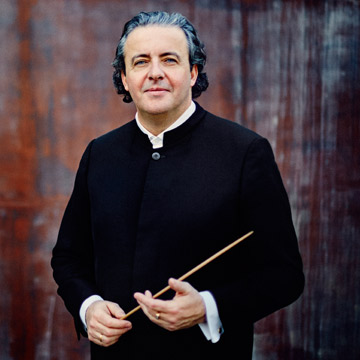 A guest of international festivals, he has appeared at the Stars of White Nights Festival in St. Petersburg, Russia, the Hollywood Bowl, Grant Park (Chicago), Tanglewood and La Folle Journée (Nantes). He has led the BBC Philharmonic on tours of Europe and Asia, including performances in Cologne, Munich, Vienna, Madrid, Beijing and Seoul, and annual concerts at the BBC Proms in London.

His operatic work includes The Flying Dutchman, Salome, Elektra, Ariadne auf Naxos, Duke Bluebeard’s Castle, Fidelio and Erwartung and productions including Eugene Onegin in Genoa, The Marriage of Figaro in Lausanne and Billy Budd in Bilbao.

He has made several recordings with the BBC Philharmonic, including recent releases of Ginastera’s orchestral works to mark the composer’s centenary, three discs of works by Manuel de Falla, one of which was a BBC Music Magazine Recording of the Month, a Gabriel Pierné release which was a Gramophone Editor’s Choice, and works by Albéniz, Arriaga, Montsalvatge, Weber and Turina which have gained excellent reviews from the specialist music press. He has also recorded Messiaen’s Turangalîla Symphony for Hyperion with the Bergen Philharmonic Orchestra, an interpretation which is said to “utterly redefine the terms under which past/current/future Turangalîlas need to be judged”. (Gramophone, October 2012).