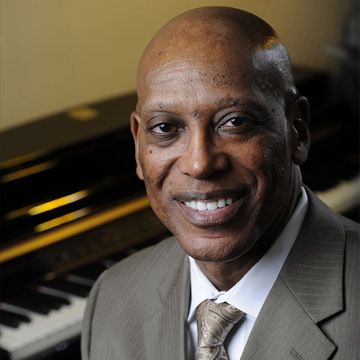 Henry Panion, III, PhD, holds degrees in music education and music theory from Alabama A & M University and the Ohio State University, respectively. He is most known for his work as conductor and arranger for superstar Stevie Wonder, for whose performances and recordings he has led many of the world’s most notable orchestras, including the Royal Philharmonic, the Bolshoi Theater Orchestra, the Birmingham (England) Symphony, the Orchestra of Paris, the Melbourne (Australia) Symphony, the Rio de Janeiro Philharmonic, the Ra’anana Philharmonic, the Nice Symphony, the Gothenburg Symphony, and the Boston Pops Orchestra. The two-CD set Natural Wonder features Dr. Panion conducting his arrangements of many of Stevie Wonder’s award-winning, chart-topping songs with Stevie and the Tokyo Philharmonic.

The creative force behind "Gospel Goes Classical" — featuring Juanita Bynum, Jonathan Butler, and the GGC Symphony Orchestra and Choir — Dr. Panion made history topping the Billboard charts on both the Gospel and Classical Crossover Charts simultaneously. Other artists for whom Dr. Panion has had the opportunity to conduct and/or arrange include The Winans, Chet Atkins, Eugenia Zuckerman, Aretha Franklin, The Blind Boys of Alabama, Chaka Khan, the Lionel Hampton Orchestra, and American Idol winners Carrie Underwood and Ruben Studdard.

As a producer, composer, arranger, and orchestrator, Dr. Panion’s work has produced two Grammy Awards, two Dove Awards, and a host of other national music awards and nominations. From 1994 to 2000, Dr. Panion served as chair of the Department of Music at the University of Alabama at Birmingham. Other honors include a 1995 Distinguished Alumni Award from Alabama A & M University and a 1996 Distinguished Alumni of the Year Award from the Ohio State University. He is the 1996 recipient of the Caroline P. and Charles W. Ireland Award for Scholarly Distinction and the 2009 recipient of the Congressional Black Caucus' Civic and Cultural Advancement Award. Dr. Panion was inducted into the Alabama Jazz Hall of Fame in 1995, as well as the Alabama A & M University Hall of Fame in 2000. The University of Alabama System Board of Trustees has honored Dr. Panion for his many contributions to the field of music by bestowing upon him the distinguished appointment of University Professor. In 2009, Dr. Panion was appointed to the post of Cultural Ambassador for the City of Birmingham, AL.