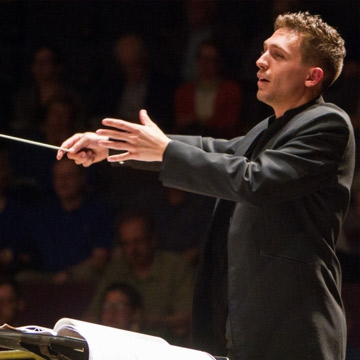 The Baltimore Choral Arts Society, now in its 54th season, is one of Maryland's premier cultural institutions. The Symphonic Chorus, Chorus, and Chamber Singers perform throughout the mid-Atlantic region, as well as in Washington, D.C., New York, and in Europe. In his third season as Music Director, Anthony Blake Clark has established new, large-scale collaborative performances with Maryland Institute College of Art, Maryland State Boychoir, and Peabody Youth Orchestra. In January of 2020, he will be leading the Chorus on its first England tour, with a prestigious invitation to perform with the City of Birmingham Symphony Orchestra.

The Baltimore Choral Arts Society provides a number of thoughtful and impactful music education programs that serve youth in and around Baltimore. These programs include CoroLAB, a new partnership with Overlea High School’s choral music program; Vocal Fellows, an expanded professional development program for early-career singers; Student Composer Project, a competition for high-school and college composers; and Christmas for Kids. Through these four primary educational programs, Choral Arts serves the very young to early-career adult musicians.

For the past 23 years, WMAR Television, the ABC network affiliate in Maryland, has featured Choral Arts in an hour-long special, Christmas with Choral Arts, which won an Emmy Award in 2006.  The ensemble has been featured frequently on The First Art (Public Radio International), Performance Today (National Public Radio) and VOX (XM Radio). In Europe, Choral Arts was featured in a program devoted to the music of Handel broadcast on Radio Suisse Romande.

In 2010, Choral Arts released Christmas at America’s First Cathedral on Gothic Records, recorded at the Baltimore Basilica, which includes familiar Christmas favorites as well as premieres by Rosephanye Dunn Powell and James Lee, III.  A recording with Dave Brubeck, featuring Brubeck’s oratorio, The Gates of Justice, was released internationally on the NAXOS label in 2004; Choral Arts is also featured on Introducing the World of American Jewish Music on Naxos. Choral Arts has two other recordings in current release: Christmas with Choral Arts and a live recording of the Rachmaninoff All-Night Vigil.

Music Director Anthony Blake Clark enjoys a reputation as one of the freshest young voices in classical music. Mr. Clark is also Director of Choral Activities in The George Washington University’s Corcoran School of Art and Design, where he conducts the University Singers and vocal chamber ensembles, as well as mentoring student conductors. He has prepared choruses for esteemed maestros Sir John Eliot Gardiner, Simon Halsey, CBE, and Gijs Leenaars for concerts with internationally renowned ensembles, including the Baltimore Symphony Orchestra, Berliner Philharmoniker, and Rundfunk Chor Berlin. At New York City’s Lincoln Center for the Performing Arts, he was recently one of several conductors for David Lang’s 1,000-voice the public domain, working under his mentor Simon Halsey; he returned as chorusmaster for the 2018 premiere of John Luther Adams’ In the Name of the Earth.

A native of Texas, Anthony Blake Clark attended Baylor University School of Music, studying composition with Dr. Scott McAllister and conducting with Dr. Lynne Gackle. He was a member of the prestigious Baylor A Cappella Choir and, in his final year, served as a conductor of the Baylor Chamber Singers. While still an undergraduate, he began his conducting activity by co-founding The Texas Baroque Ensemble, presenting in and around San Antonio a wide range of repertoire from the Baroque and Classical eras. Mr. Clark completed advanced conducting studies under three-time Grammy Award winner Simon Halsey, CBE at the United Kingdom’s University of Birmingham, which conferred his Masters of Music Degree in 2015.