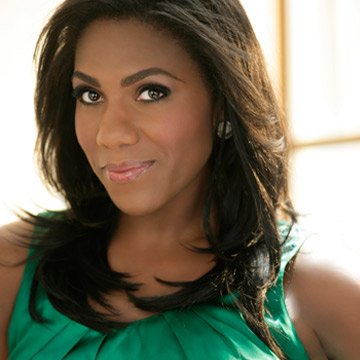 J’Nai Bridges, known for her “plush-voiced mezzo-soprano” (The New York Times), has been heralded as “a rising star” (Los Angeles Times), gracing the world's top stages in repertoire ranging from traditional favorites to world premieres to spirituals and standards. Her 2019-20 season includes seven house debuts and two role debuts, including her much-anticipated house debut at The Metropolitan Opera.

Operatic engagements in the U.S. this season include her debut at The Metropolitan Opera, singing the role of Nefertiti in Philip Glass’ Akhnaten, and her house and role debut at Washington National Opera performing Dalila in Samson et Dalila. Bridges will sing the title role of Carmen for the first time in Europe at the Dutch National Opera, and will make her house and role debut with the Festival d’Aix-en-Provence singing Margret in a new production of Wozzeck, conducted by Sir Simon Rattle.

Bridges opens her season with her Tanglewood Festival debut, performing Beethoven’s Symphony No. 9 with the Boston Symphony Orchestra. She continues to showcase her concert repertoire by making her debut with San Antonio Symphony in Mahler’s Symphony No. 2, and performing with the New Jersey Symphony in Handel’s Messiah. Bridges also performs an art song recital with the Philadelphia Chamber Music Society, and closes her season by making her debut at the BBC Proms at the Royal Albert Hall in Beethoven’s Symphony No. 9 with Chineke! Orchestra and Friends.

Recent opera performance highlights include San Francisco Opera for her house role debut in the title role of Carmen, LA Opera for her role debut as Kasturbai in Philip Glass’ Satyagraha, creating the role of Josefa Segovia in the world premiere of John Adams’ Girls of the Golden West at San Francisco Opera and again at The Dutch National Opera, a house and role debut at Gran Teatre del Liceu as Federica in Verdi’s Luisa Miller, her debut as Preziosilla in La Forza del Destino with Opernhaus Zürich, a debut at Bavarian State Opera as Bersi in Andrea Chénier; at Los Angeles Opera as Nefertiti in Akhnaten; and at Vancouver Opera as Sister Helen Prejean in Jake Heggie’s Dead Man Walking; and performances as Carmen in the world premiere of Bel Canto, an opera by Jimmy Lopez, based on the novel by Ann Patchett at the Lyric Opera of Chicago; the title role in The Rape of Lucretia at Wolf Trap Opera; Suzuki in Madama Butterfly at San Diego Opera and Wolf Trap Opera; and Adalgisa in Norma at Knoxville Opera.

Bridges is a recipient of the prestigious 2018 Sphinx Medal of Excellence Award, a 2016 Richard Tucker Career Grant, first prize winner at the 2016 Francisco Viñas International Competition, first prize winner at the 2015 Gerda Lissner Competition, a recipient of the 2013 Sullivan Foundation Award, a 2012 Marian Anderson award winner, the recipient of the 2011 Sara Tucker Study Grant, the recipient of the 2009 Richard F. Gold Grant from The Shoshana Foundation, and the winner of the 2008 Leontyne Price Foundation Competition. J’Nai completed a three-year residency with the Patrick G. and Shirley W. Ryan Opera Center at Lyric Opera of Chicago, represented the United States at the prestigious BBC Cardiff Singer of the World Competition and was a Young Artist at the Glimmerglass Festival in Cooperstown, New York.

A native of Tacoma, Washington, she earned her Master of Music degree from Curtis Institute of Music, and her Bachelor of Music degree in vocal performance from the Manhattan School of Music.