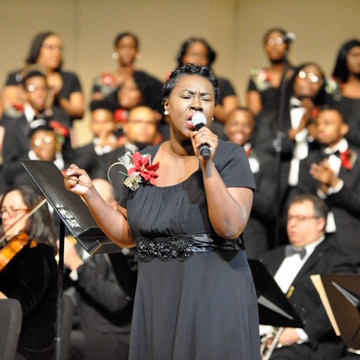 The Morgan State University Choir is one of the nation’s most prestigious university choral ensembles. The choral forces of this critically acclaimed choir include The University Choir, which is over 120 voices strong, and The Morgan Singers – approximately 40 voices. While classical, Gospel, and contemporary popular music comprise the choir’s repertoire; the choir is noted for its emphasis on preserving the heritage of the spiritual, especially in the historic practices of performance.

The Morgan State University Choir has performed for audiences throughout the United States and all over the world – including Virgin Islands, Canary Islands, Canada, Africa, Asia and Europe. One of the choir’s most historic moments was performing under the baton of Robert Shaw, conducting the Orchestra of St. Lukes and joined by Jessye Norman and others in Carnegie Hall’s One Hundredth Birthday Tribute to Marian Anderson. A major milestone happened 1996-1997 season when the “Silver Anniversary” concert was broadcast throughout the state of Maryland. The concert won three Emmy Awards for Maryland Public Television (MPT). MPT continues to air this hallmark performance during sections of their membership drives.

The Morgan State University Choir continues to share its musical gifts on many grand stages all over the world – with numerous dignitaries and celebrated performers – making them cultural ambassadors for Morgan State University, the City of Baltimore, the State of Maryland and the United States.  Please visit www.msuchoir.org for additional information