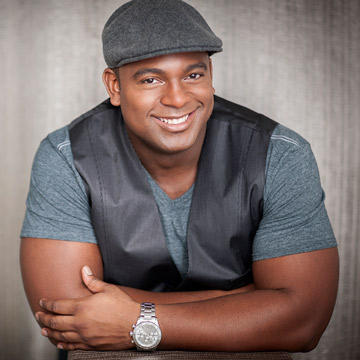 Praised by Anthony Tommasini of the New York Times for his “robust voice” and Anne Midgette of The Washington Post as an artist “fully ready for a big career,” bass-baritone Ryan Speedo Green is quickly establishing himself as an artist of international demand at the world’s leading opera houses. The 2019 – 2020 season sees Mr. Green’s fourth consecutive season at the Metropolitan Opera, making his role debut as Jake in James Robinson’s new production of the Gershwin’s Porgy and Bess, and a return to the Wiener Staatsoper for roles including Ferrando in Trovatore, Raimondo in Lucia di Lammermoor, and Banquo in Macbeth. Orchestral engagements include the bass soloist in a gala performance of Verdi’s Requiem with the Tanglewood Music Festival conducted by Andris Nelsons, and a return to the Ravinia Festival for Mahler’s Symphony No 8 conducted by Marin Alsop. Mr. Green will also be presented in recital with soprano Latonia Moore by the George London Foundation at the Morgan Library in New York, accompanied by Ken Noda.

The 2018 – 2019 season saw Mr. Green return to the Metropolitan Opera to sing the King in Aida, conducted by Nicola Luisotti and broadcast to theaters around the world as part of the Met’s Live in HD program, and for a reprise of Colline in La bohème. Mr. Green also returned to the Wiener Staatsoper as a member of the ensemble with roles including Sarastro in Die Zauberflöte, Der Einarmige in Die Frau ohne Schatten, and Lodovico in Otello, among others.

Orchestral engagements for the 2018 – 2019 season included Beethoven’s Symphony No 9 conducted by Marin Alsop at the Ravinia Festival, a debut with the Mostly Mozart Festival singing Mozart’s Requiem with Louis Langrée for the closing night of the festival, and a debut with Chamber Music Society of Lincoln Center for Bach’s Ich habe genug with the Orion String Quartet. Mr. Green was also presented in recital at the Terrace Theatre at the Kennedy Center as winner of the Marian Anderson Vocal Award from Washington National Opera, and in recital with Dayton Opera at the Schuster Performing Arts Center.

In the fall of 2016, Little, Brown published Sing for Your Life, by New York Times journalist Daniel Bergner. The book tells the story of Mr. Green’s personal and artistic journey: from a trailer park in southeastern Virginia and from time spent in Virginia’s juvenile facility of last resort to the Met stage. The New York Times Book Review called the book “one of the most inspiring stories I’ve come across in a long time,” and the Washington Post called it a “vital, compelling, and highly recommended book.” Sing for your Life has been honored with a number of recognitions including the New York Times bestseller and editor’s choice, a Washington Post Notable Book, and a Publishers Weekly Book of the Year.

Highlights of Mr. Green’s performances at the Metropolitan Opera include Colline in the iconic Zeffirelli production of La bohème, which the New York Times labeled Mr. Green “the real showstopper,” and the New York Observer marked this performance as his “breakthrough as a star.” Additional highlights include Oroe in Semiramide, Rambo in the premier of The Death of Klinghoffer conducted by David Robertson, the Second Knight in a new production of Parsifal which was broadcast as part of the Met’s Live in HD program, the Bonze in Madama Butterfly, and the Jailer in Tosca. Additional operatic engagements include Ferrando in Il trovatore with Opera de Lille’s traveling production, Third King in Die Liebe der Danae with the Salzburg Festival, his house and role debut as Osmin in the James Robinson production of Die Entführung aus dem Serail at Houston Grand Opera, as well as his house and role debut as Escamillo in Carmen with Opera San Antonio.

At the Wiener Staatsoper, Mr. Green has been seen as Sparafucile in a new production of Rigoletto, Fasolt in Das Rheingold, Don Basilio in Il Barbiere di Siviglia, Varlaam in Boris Godunov, Angelotti in Tosca, Timur in a new production of Turandot, Peneios in Daphne, Fouquier-Tinville in Andrea Chénier, the Monk in Don Carlo, the Pope in Lady Macbeth of Mtsensk, and the King in Aida.

Recital engagements include his debut at the Ravinia Festival with pianist Adam Nielsen and a recital and residency at the Torggler Summer Vocal Institute at Christopher Newport University in his native Virginia.

Honors and awards include National Grand Finals winner of the 2011 Metropolitan Opera National Council Auditions, a 2014 George London Foundation Award, a 2014 Annenberg grant recipient, a 2014 Gerda Lissner Foundation First Prize winner, both the Richard and Sara Tucker Grants from the Richard Tucker Foundation, and a finalist in the Palm Beach Opera Competition.