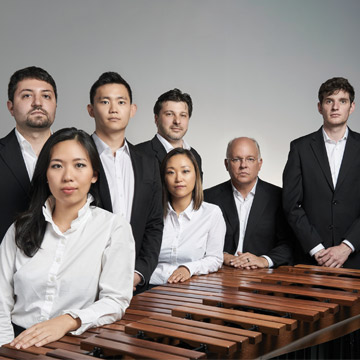 At the pinnacle of his legendary career, performer and pedagogue Robert van Sice has assembled a stunning collection of young artists who are reinventing the concert experience. The Percussion Collective transcends the medium of percussion through uncommon performance experiences that surprise and engage audiences at a profound emotional level. The hallmarks of van Sice’s musical approach—precise execution, sonic refinement, and dynamic onstage communication—are all on display in the most vivid manner to date. Drawing from an incomparably rich bouquet of talent, The Percussion Collective flexes in size offering exquisitely curated programs for an array of venues and settings. The fabulously successful ten concert inaugural tour of the United States in the Spring of 2018 featured the first performances of the newly commissioned Seaborne, an immersive multimedia work by Emmy Award-winning composer Garth Neustadter and videographer Kjell van Sice that celebrates the beauty of our world’s oceans.

The 2018-2019 season began with the group’s first tour to China in October ‘18, featuring performances of Seaborne in the new Shanghai Symphony Hall, the stunning Jiangjsu Grand Theatre at Nanjing University, and the beautiful temple in Beijing. The tour was received with critical acclaim:

In March and in a performance presented by the Yellow Barn Music Festival, The Collective performed Martin Bresnick’s Caprichos Enfaticos at the Nasher Sculpture Garden in Dallas, Texas. This powerful work is based on Francisco Goya's etchings depicting the horrors of war. The Percussion Collective was joined by Yellow Barn's Artistic Director, Seth Knopp.

“This was truly masterful performing, and it is a lesson it getting capacity crowds to contemporary music performances.” - Theater Jones Reviews, March 2019

A performance with the Oregon Symphony and maestro Carlos Kalmar saw The Percussion Collective’s first orchestral showcase and the world premiere of Christopher Theofinidis’s Drum Circles. In this piece, four members of The Collective and the orchestra’s own percussion section surrounded the orchestra in a circle, creating a spatial and theatrical effect.

The 2019-2020 season will begin with The Collective visiting the Aspen Music Festival in August, where they will perform Drum Circles. Following performances include the Baltimore Symphony, Colorado Symphony, Curtis Symphony Orchestra, and Hartford Symphony. Residencies at The University of Nebraska, UT Austin, and the world premiere of Seaborne with Orchestra with maestro Teddy Abrams and the Louisville Orchestra. In the spring of 2020, The Percussion Collective will make its first appearance in Europe, with a tour through the Musikverein in Vienna, Concertgebouw in Amsterdam, and the Purcell Hall in London. A first recording of Seaborne that includes both the audio and visual components will also take place later in the 2020 season.

The roster of The Percussion Collective includes some of the world’s most esteemed and dynamic young voices in the art form. They are drawn from the Chamber Music Society of Lincoln Center, Camerata Pacifica, the Pittsburgh New Music Ensemble as well as faculty members from universities such as Miami’s Frost School of Music, Michigan State University, the University of Massachusetts, Vanderbilt’s Blair School of Music, and the University of Kansas. Featuring players from Europe, Asia, and the US, this new generation of virtuosi represent the leading edge of innovation in concert conception and performance.

“In his hands, the marimba becomes a voice with richness of sound and expression that one would never expect from a percussion instrument.” – Journal de Geneve. Robert van Sice is one of the world's foremost performers of contemporary music for marimba, having premiered over one hundred pieces including many of today’s seminal works for the instrument. In 1989 he gave the first solo marimba recital at the Concertgebouw in Amsterdam, and subsequent recitals followed in Vienna’s Musikverein, London’s Queen Elizabeth Hall, Paris’s Centre Georges Pompidou, New York’s Carnegie Hall, Tokyo’s Casals Hall, and dozens more. Many were broadcast by the BBC, Swedish Radio, Norwegian Radio, Radio France, WDR, and NPR. He has appeared as a soloist with Europe's leading contemporary music ensembles such as London Sinfonietta, Ensemble Contrechamps in Geneva and L’Itineraire in Paris. In 1997 he was appointed Director of Percussion Studies at the Yale School of Music and subsequently joined the faculties of the Curtis Institute and Peabody Institute of Johns Hopkins University. His former students have won many prizes and are active in more than twenty countries. Van Sice has given hundreds of master classes at leading conservatories around the world.