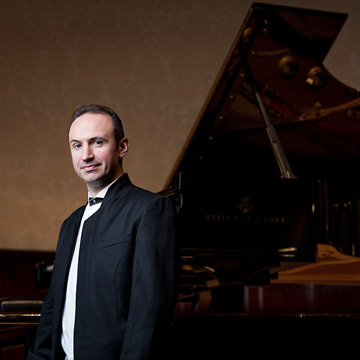 Macedonian pianist Simon Trpčeski (pronounced terp-CHESS-kee) has established himself as one of the most remarkable musicians to have emerged in recent years, praised not only for his powerful virtuosity and deeply expressive approach, but also for his charismatic stage presence and commitment to strengthening Macedonia’s cultural image.

Dedicated to making industry-defining recordings, Mr. Trpčeski has recorded for EMI Classics, Avie Records, Onyx Classics, and Wigmore Hall Live. His first recording, released in 2002, featured works by Tchaikovsky, Scriabin, Stravinsky, and Prokofiev, and received both the “Editor’s Choice” and “Debut Album” awards at the Gramophone Awards. His 2005 Rachmaninoff, 2007 Chopin, and 2008 Debussy recordings received extensive praise from critics, and in 2010 and 2011, his interpretations of Rachmaninoff’s four piano concertos and the Rhapsody on a Theme of Paganini with Vasily Petrenko and the Royal Liverpool Philharmonic were recognized with Classic FM, Gramophone “Editor’s Choice,” and Diapason d’Or distinctions. Mr. Trpčeski’s March 2012 recital at the Wigmore Hall was released on the “Wigmore Hall Live” label and was immediately hailed by The Telegraph as “Classical CD of the Week.”

His latest recording, featuring Prokofiev’s Piano Concertos Nos. 1 and 3 was released in 2017, with The Guardian noting Mr. Trpčeski’s “fiery articulation, brazen rhythms, [and] an ability to navigate corners with a swagger that feels sturdy and nimble at once.” Prior to that Mr. Trpčeski released Tchaikovsky’s Piano Concertos Nos. 1 and 2 with Vasily Petrenko and the Royal Liverpool Philharmonic Orchestra in 2014 on the Onyx Classics label.
Mr. Trpčeski performs chamber music as often as he can at festivals such as Aspen, Verbier, Risor, Bergen, and the Baltic Sea Festival.  He has a regular duo partnership with cellist Daniel Müller-Schott and recent performances have included a North American tour with Mr. Muller-Schott in Vancouver, Montreal, and Washington, D.C; appearances at the Concertgebouw, Wigmore Hall, and in Bilbao; and trio performances with Julia Fischer and Mr. Müller-Schott at the Wigmore Hall and Dresden Philharmonie.

With the special support of KulturOp — Macedonia’s leading cultural and arts organization — Mr. Trpčeski works regularly with young musicians in Macedonia to help cultivate the talent of the country’s next generation of artists. His Makedonissimo project, dedicated to introducing the world to traditional Macedonian folk tunes and melodies, has appeared at the Wigmore Hall, the Concertgebouw, and the Lille Festival as well in Liverpool and Birmingham.

Born in Macedonia in 1979, Simon Trpčeski is a graduate of the School of Music at the University of St. Cyril and St. Methodius in Skopje, where he studied with Boris Romanov. He was previously named a BBC New Generation Artists, and in May 2003, he was honored with the Young Artist Award by the Royal Philharmonic Society. In December 2009, the President of Macedonia, H.E. Gjorge Ivanov, honored him with the Presidential Order of Merit for Macedonia, a decoration given to foreign and domestic dignitaries responsible for the affirmation of Macedonia abroad. Most recently, in September 2011, Mr. Trpčeski became the first-ever recipient of the title “National Artist of Macedonia.” He makes his home in Skopje with his family.