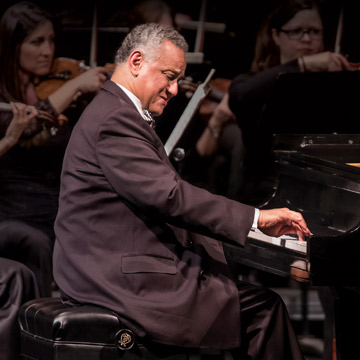 André Watts burst upon the music world at the age of 16 when Leonard Bernstein chose him to make his debut with the New York Philharmonic on one of the orchestra’s Young People's Concerts, a concert which was broadcast nationwide on CBS-TV. Only two weeks later, Bernstein asked him to substitute at the last minute for the ailing Glenn Gould in performances of Liszt's E-flat Concerto with the New York Philharmonic, thus launching his career in storybook fashion. More than half a century later, André Watts remains one of America’s most distinguished and celebrated performing artists.

A perennial favorite with orchestras throughout the US, Mr. Watts is also a regular guest at the major summer music festivals. Recent and upcoming engagements include appearances with the Philadelphia Orchestra in Philadelphia and on tour, the New York and Los Angeles Philharmonics, the Minnesota Orchestra, and the St. Louis, Atlanta, Detroit, Cincinnati, Dallas, Houston, Baltimore, Indianapolis and Nashville symphonies among others. Recent international engagements include concerto and recital appearances in Japan, Hong Kong, Germany and Spain. In the fall of 2017, he toured with the Orpheus Chamber Orchestra with performances at the University of Nebraska, Purdue University and the Norton Center in Danville, KY, as well as at the New Jersey Performing Art Center and Carnegie Hall. In September 2018, he returned to the Philadelphia Orchestra as the featured soloist for the opening concerts of the orchestra’s 18/19 season.

André Watts has had a long and frequent association with television, having appeared on numerous programs produced by PBS, the BBC and the Arts and Entertainment Network, performing with the New York Philharmonic, Boston Symphony, Philadelphia Orchestra, Mostly Mozart Festival Orchestra and the Chamber Music Society of Lincoln Center among others. His 1976 New York recital for Live From Lincoln Center was the first full length recital broadcast in the history of television, while his performance at the 38th Casals Festival in Puerto Rico was nominated for an Emmy Award in the category of Outstanding Individual Achievement in Cultural Programming. Mr. Watts’ most recent television appearances were with the Philadelphia Orchestra as the featured soloist for the orchestra’s 100th Anniversary Gala and a performance of the Brahms Concerto No.2 with the Seattle Symphony, Gerard Schwarz conducting, for PBS.

Mr. Watts’ extensive discography includes recordings of works by Gershwin, Chopin, Liszt and Tchaikovsky for CBS Masterworks; recital CD’s of works by Beethoven, Schubert, Liszt and Chopin for Angel/EMI; and recordings featuring the concertos of Liszt, MacDowell, Tchaikovsky and Saint-Saens on the Telarc label. He is also included in the Great Pianists of the 20th Century series for Philips. In May 2016, SONY Classical released ANDRE WATTS – The Complete Columbia Album Collection, which features all of the concerto and solo recordings which Mr. Watts made for Columbia Masterworks. The 12 CD set includes his legendary recordings of concertos by Rachmaninoff, Brahms, Chopin, Tchaikovsky and Liszt with conductors Leonard Bernstein, Seiji Ozawa, Erich Leinsdorf and Thomas Schippers, and solo works by Liszt, Beethoven, Schubert, Debussy, Chopin and Gershwin.

A much-honored artist who has played before royalty in Europe and heads of government in nations all over the world, André Watts received a 2011 National Medal of Arts, given by the President of the United States to individuals who are deserving of special recognition for their outstanding contributions to the excellence, growth, support and availability of the arts in the United States. In June 2006, he was inducted into the Hollywood Bowl of Fame to celebrate the 50th anniversary of his debut (with the Philadelphia Orchestra at the age of 10) and he is also the recipient of the 1988 Avery Fisher Prize. At age 26 Mr. Watts was the youngest person ever to receive an Honorary Doctorate from Yale University and he has since received numerous honors from highly respected schools including the University of Pennsylvania, Brandeis University, The Juilliard School of Music and his Alma Mater, the Peabody Conservatory of Johns Hopkins University.

Mr. Watts was appointed to the Jack I. and Dora B. Hamlin Endowed Chair in Music at the Jacobs School of Music at Indiana University in May 2004 and in 2017 was named a Distinguished Professor, the highest academic rank the university bestows upon its faculty.