The Baltimore Symphony Orchestra Fellowship was a mentorship program for outstanding young musicians from underrepresented communities. Launched in the 2012-2013 season, the program was conducted in partnership with the Sphinx Organization, a nonprofit that shares a vision of inclusivity similar to the vision of the Baltimore Symphony: promoting diversity in the arts. During the Orchestra Fellowship residency, musicians had the opportunity to be mentored by members of the BSO, to perform in several BSO concerts, and to work with Education and Outreach initiatives, such as OrchKids, OrchLab, the Academy and the Baltimore Symphony Youth Orchestra, preparing them for a career as a professional musician. The program ended in 2016. 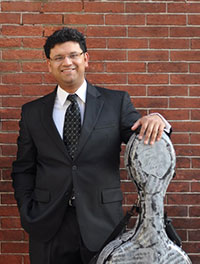 Cellist Ismar Gomes was named Baltimore Symphony Orchestra Fellow in March of 2016. Mr. Gomes performs across the US and Europe as soloist, recitalist and chamber musician. Mr. Gomes has appeared at the Walla Walla Chamber Music Festival, Evolution Contemporary Music Series, String Fest, Le Petit Salon, Early Music at St. Mark’s, and Old Town Hall Concerts, among others. He has given 50+ world premiere performances, and is engaged in several commissioning projects. Collaborators include members of the Pittsburgh and Baltimore Symphonies, as well as members of the Johannes, and Brentano String Quartets.

On faculty at Loyola University of Maryland and Notre Dame of Maryland University, Mr. Gomes has enjoyed teaching young musicians for well over a decade, offering guest master classes at universities and in preparatory programs around the country. Mr. Gomes was a faculty member and guest artist for StringFest at Merkin Hall, the Performing Arts Institute at Wyoming Seminary, and the Rushmore Music Festival, as well as a Young Artist at the Three Bridges International Music Festival. In 2014, Mr. Gomes traveled to Africa for a series of Chamber Music concerts in Cameroon.

Mr. Gomes attended the Peabody Conservatory where he studied with Alison Wells and Amit Peled. Prior to his time at Peabody, Mr. Gomes was a student of Marc Johnson, long time cellist of the Vermeer Quartet. He has performed in masterclasses for eminent cellists including Steven Doane, Janos Starker and Steven Isserlis, in addition to being mentored in chamber music by members of the Vermeer, Jerusalem, Brentano, Juilliard, Tokyo and Emerson String Quartets. 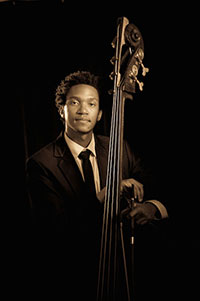 Double bassist Victor Holmes from San Antonio, Texas was named Baltimore Symphony Orchestra Fellow in September 2014. During his fellowship year, Mr. Holmes was mentored by BSO Principal Bass Bob Barney. He began playing bass in fifth grade in an after-school string program run by his mother. From fifth grade through high school, Mr. Holmes played bass in the public school string program, not receiving formal lessons until he attended Texas Christian University. He completed his undergraduate studies at The Boston Conservatory and continued his graduate studies at Boston University, studying with Edwin Barker and Ben Levy of the Boston Symphony.

Mr. Holmes won a principal position with the premier United States Air Force Band upon completion of his residency. 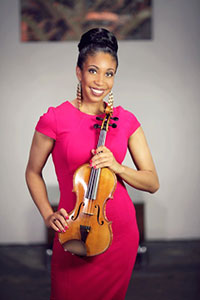 Violinist Tami Lee Hughes from Baton Rouge, Louisiana, was welcomed as the first BSO Orchestra Fellow in the 2012-2013 season. During her residency, she was mentored by Maestra Marin Alsop as well as BSO musicians Gregory Kuperstein and Ivan Stefanovic.

Since completing her fellowship with the BSO, she has performed with a number of symphony orchestras, including the Memphis Symphony, Chattanooga Symphony, Charleston Symphony, South Florida Symphony, and Symphony Orchestra Augusta.  She also toured for two seasons with the Sphinx Virtuosi Chamber ensemble, performing in Carnegie Hall, the Kennedy Center, and a number of other concert halls across the country.  She recently made her television debut performing with Grammy-award winning gospel artist Kirk Franklin on Sunday Best, an international live broadcast program on the BET network. It was her first time playing with choreography. Ms. Hughes wrote to the BSO, “It took me a little time to coordinate the movements and steps, but once I got into the groove, I learned that I can play and move with the best of them!”

Ms. Hughes also continues to develop her music education interests.  She launched an educational video series Vlogs for Music Students on YouTube.  In these videos, she shares tips, insight, and stories about her experience as a musician to inspire students of all levels, from beginning through college, to enjoy and make the most of their music training.  She continues to play at schools and adult day care facilities in music outreach performances. She uses the resources and skills she acquired at the BSO in many of my activities.

She wrote, “I keep in touch with Gregory Kuperstein, who has continued to mentor me well beyond my time with the BSO.  I value my experience with the BSO, and whether I'm performing as a soloist or ensemble player, I know the BSO has contributed to who I am as a musician.”