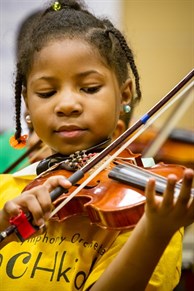 The Baltimore Symphony Orchestra’s OrchKids have performed for over half a million audience members since the program’s inception in 2008. Our students have performed at major venues across the United States, including the Joseph Meyerhoff Symphony Hall, Carnegie Hall, DiMenna Center, Verizon Center, and in countless other venues in Virginia, Maryland, Connecticut, Pennsylvania, District of Columbia, California, and New York.

In fulfilling its foremost mission of social change, the OrchKids have performed at Ted X Baltimore and Diversity Conferences. As a laboratory for other socially minded music programs OrchKids has played host to over 100 El Sistema-inspired programs, countless universities, several major American orchestras, and various city and state governments.

OrchKids has been recognized for its accomplishments in the media on CBS’s 60 Minutes, The New York Times, PBS, and The Washington Post. OrchKids was privileged to be the recipient of the 2013 National Arts and Humanities Youth Program Award.