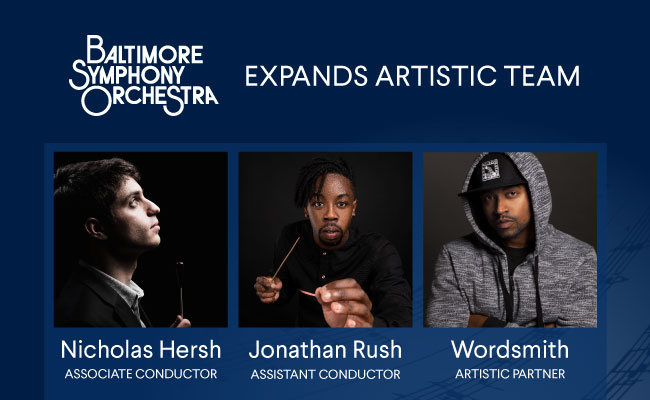 Dear Friends of the BSO,

A few weeks ago, we were thrilled to announce an extraordinary five-year agreement with our musicians. With this milestone behind us, we can turn our focus to the heart of our multi-year strategic plan – ensuring that the art and education we deliver are of the highest quality, engaging with our audience and donors, and serving our community in ways that are equally surprising and inspiring.

We have hit the ground running. On Tuesday, we welcomed members of the orchestra back to the Joseph Meyerhoff Symphony Hall for the first time since March in preparation for our new digital concert series. A series set to premiere in October, please stay tuned for detailed announcements including series schedule, repertoire, and pricing.

Today, and in anticipation of this forthcoming announcement, we are excited to share a strategic expansion of the BSO’s artistic team: the extension of Nicholas Hersh as Associate Conductor and the new appointments of both Jonathan Rush as Assistant Conductor and Wordsmith as Artistic Partner.

With multiple musician cohorts rehearsing and recording concurrently, Nicholas and Jonathan are sharing conducting duties and will both be featured on and off the podium as part of the digital concert series. Nicholas, an established leader in the BSO family, is helping to curate the series, building on his six seasons as the BSO’s Assistant and then Associate Conductor. Jonathan, a former student of Music Director Marin Alsop who at age 25 is taking the conducting world by storm, impressed local audiences and the orchestra alike in his acclaimed 2019 BSO Symphony in the City debut. A Baltimore-based musician and entrepreneur, Wordsmith will also be featuring this season, collaborating in projects involving original text composition, narration, acting and hosting. For more information about each of these strategic appointments, including additional educational and outreach roles and responsibilities, please read the BSO’s full announcement here.

Together with the leadership of Music Director Marin Alsop, we are thrilled to retain and welcome such tremendous talent to the BSO family.

As always, we would not be where we are today without your generous support, whether in the form of a donation or attendance. We look forward to performing for you all again very soon!