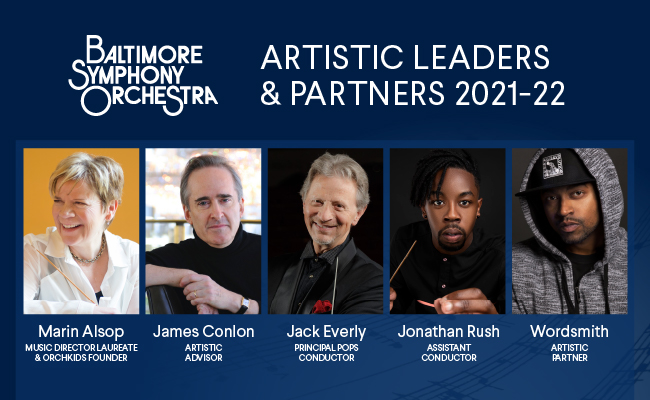 November 17, 2020 – The Baltimore Symphony Orchestra (BSO) today announced the appointment of James Conlon, one of today’s most versatile and respected conductors, as Artistic Advisor. Conlon will begin his role in September 2021, following the conclusion of BSO Music Director Marin Alsop’s historic 14-year tenure.

Artistic Advisor Appointment
Internationally renowned conductor James Conlon will join the BSO as Artistic Advisor beginning in the 2021-22 season. Conlon, who has affirmed that he is not a candidate in the BSO’s forthcoming Music Director search, has cultivated a vast symphonic, operatic, and choral repertoire, having conducted virtually every major American and European symphony orchestra since his debut with the New York Philharmonic in 1974.

As Artistic Advisor, Conlon will help ensure the continued artistic quality of the Orchestra. In addition to leading three concert weeks per year in each of the 2021-22, 2022-23, and 2023-24 seasons, Conlon will fill many duties off the podium including those related to artistic personnel – such as filling important vacancies and attracting exceptional musicians as outlined in the BSO’s recent five-year collective bargaining agreement.

Conlon’s considerable experience and success directing world-class musical institutions, including the LA Opera since 2006, inform this special advisership. The appointment comes following the recommendation of the BSO’s Artistic Advisory Committee, which consists of musicians elected by their peers, together with management.

Conlon’s appearances in 2021-22 season will also mark his BSO debut. “I am very happy to have been asked to serve as Artistic Advisor of the Baltimore Symphony Orchestra and have accepted with the greatest pleasure,” said Conlon. “I look forward to beginning our work next fall. The BSO's reputation as one of America's great symphony orchestras, as well as a leader in imaginative and relevant programming, is well known. That is in large measure thanks to Marin Alsop, whom I have known for many decades, and I am particularly enthusiastic to work together with her in order to assure the succession process for the orchestra's future. I look forward to collaborating with the musicians, management, artistic leadership team, and the entire BSO community at this pivotal time in our history.”

Artistic Stability and Strength through Transition
With his appointment as Artistic Advisor, James Conlon will join an exceptional artistic team who, together along with the members of the Orchestra, provide the profile, reputation, and ability to shepherd the BSO’s artistic programming and community impact during a time of transition.

For the balance of the 2020-21 season, this team includes Associate Conductor Nicholas Hersh, who graciously extended his tenure to help lead the digital series, BSO Sessions. In September 2021, Marin Alsop will begin her tenure as Music Director Laureate and OrchKids Founder – a role that includes leading three concert weeks per season through 2025-26. Principal Pops Conductor Jack Everly will continue to lead a high-profile season of beloved classics and contemporary pops performances, and Assistant Conductor Jonathan Rush and Artistic Partner Wordsmith will provide direction and exciting collaborations as part of subscription concerts and the BSO’s education and community engagement initiatives.

With stability and strength in place, the BSO will also move forward with a multi-year, international Music Director search, a process including superb conductors from around the world leading the Orchestra beginning in the 2021-22 season.

“The Baltimore Symphony Orchestra is one of the most important orchestras in the country,” said BSO President & CEO Peter Kjome. “Marin Alsop expanded the BSO’s influence and visibility nationally and internationally, and we continue to make remarkable progress as an organization. The process of identifying a leader who is not only an extraordinary musician, but also a passionate advocate of the Orchestra’s vital role in the community, will take time. The appointment of James Conlon as Artistic Advisor allows that time, and it is a wonderful testament to those in Baltimore, Maryland, and beyond that the BSO’s positive momentum continues.”

About James Conlon
Through worldwide touring, high-profile music directorships, an extensive discography and videography, numerous essays and commentaries, frequent television appearances, and a wide range of guest-speaking engagements, James Conlon has become one of classical music’s most recognized interpreters. As Music Director of LA Opera, he has led more performances than any other conductor in the company’s history, and his recordings of LA Opera productions have received four Grammy® Awards.

Conlon is Conductor Laureate of the Cincinnati May Festival, where he served as Music Director for 37 years, one of the longest tenures of any director of an American classical music institution. He has also served as Principal Conductor of the RAI National Symphony Orchestra (Torino, Italy); Music Director of the Ravinia Festival; Principal Conductor of the Paris Opera; General Music Director of the City of Cologne, Germany; and Music Director of the Rotterdam Philharmonic. In addition to over 270 performances at the Metropolitan Opera, he has conducted at Teatro alla Scala, Wiener Staatsoper, Mariinsky Theatre, and Royal Opera at Covent Garden, among other opera houses. His discography includes recordings for Bridge, Capriccio, Decca, EMI, Erato, and Sony Classical. As a speaker, his appearances throughout the country are widely praised, and he is also a noted advocate for fresh hearings of those composers oppressed by the Nazi regime.

Conlon holds four honorary doctorates and has received numerous other awards, including France’s highest honor, the Legion d’Honneur, which he personally accepted from then-President of the French Republic Jacques Chirac. More information about Conlon can be found at JamesConlon.com.

About the Baltimore Symphony Orchestra
For over a century, the Baltimore Symphony Orchestra (BSO) has been recognized as one of America’s leading orchestras and one of Maryland’s most significant cultural institutions. Under the direction of Music Director Marin Alsop, the orchestra is internationally renowned and locally admired for its innovation, performances, recordings and educational outreach initiatives including OrchKids.