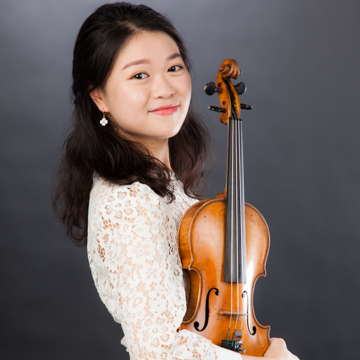 It has been said that violinist Agnes Tse’s musical journey began in her baby stroller when she was transfixed by a performance of Herbert von Karajan conducting on TV. She had to wait until she was four before receiving a size 1/8 violin as a toy and the violin has been her closest companion ever since.

While recently completing her Master of Music degree at The Juilliard School as a student of Lewis Kaplan and Joel Smirnoff, within one remarkable two-week span, she worked with the London Symphony Orchestra under Sir Simon Rattle and was offered a position with the Baltimore Symphony under Marin Alsop.

A native of Hong Kong, Ms Tse has appeared as a soloist with the Hong Kong Philharmonic Orchestra and the Pan Asia Symphony Orchestra. A participant of the New York String Orchestra Seminar at Carnegie Hall, she has been heard at the Music Academy of the West, Tanglewood Music Center, Bowdoin International Music Festival and the International Summer Academy, Mozarteum Universität Salzburg; where she studied with Pierre Amoyal and Zakhar Bron.

An avid chamber musician, she has appeared in Juilliard’s ChamberFest and London Symphony Orchestra’s Discovery Day where she performed in a string quartet with David Alberman, Principal Second Violin of the LSO. Her chamber music mentors include Emanuel Ax, Pamela Frank, Yo-Yo Ma and the Juilliard and Takács quartets. She has also performed with the two contemporary music ensembles at the Juilliard School, AXIOM and New Juilliard Ensemble.

Ms. Tse was a former Co-Concertmaster of the Juilliard Orchestra, Assistant Concertmaster of the Symphony in C and has been a substitute player at the New York Philharmonic and Princeton Symphony Orchestra. Outside of music, she enjoys walking around the streets of New York City to discover flea markets, antique stores, handmade gift shops, cafés and restaurants.