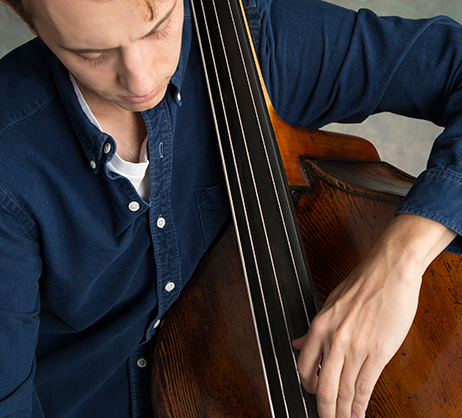 Starting in 2016, Drew joined the Midsummer’s Music Festival, where he performs numerous chamber music concerts throughout beautiful Door County, Wisconsin during the summertime. Drew also collaborated on many chamber music concerts in Miami Beach, including a performance of Edgar Meyer’s Concert Duo for Violin and Bass in which he was hailed by the South Florida Classical Review as “…nothing short of superb”.

Inspired by his students, Drew teaches privately and regularly taught at the Miami Music Project. In November of 2016, Drew was invited to Colombia, South America to teach lessons and masterclasses through La Academia Filarmónica de Medellín.

Drew attended the Indiana University Jacobs School of Music, where he studied with pedagogue Lawrence Hurst. After graduating from IU, he earned his Master’s of Music from the Rice University Shepherd School of Music, under the tutelage of Timothy Pitts. Other influential teachers include Paul Ellison, Harold Robinson, Peter Lloyd, Jeffrey Turner and Bruce Bransby.

In his free time, Drew enjoys reading, coffee and watching as many Chicago Cubs broadcasts as possible.

Andrew will be joining the Baltimore Symphony Orchestra as a guest musician for the 2018-19 Season.