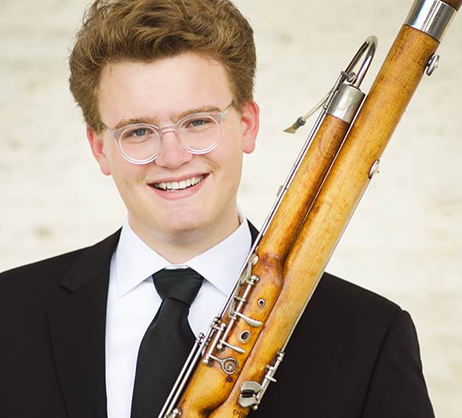 Harrison received his Bachelor of Music from The Juilliard School in May 2017, where he studied with Judith LeClair. In addition to receiving a Kovner Fellowship, Harrison was the winner of Juilliard’s 2017 Peter Mennin Prize for outstanding achievement and leadership in music.

A devoted chamber musician, Harrison studied with the New York Woodwind Quintet as a member of their Juilliard seminar and has since gone on to perform in New York's annual ChamberFest, masterclasses at the Chamber Music Society of Lincoln Center and in a woodwind quintet with members of the New York Philharmonic for their Very Young People’s Concerts.

Summer festivals include participation at the Aspen Music Festival and School as a New Horizons Fellow, the Tanglewood Music Center, the Music Academy of the West, the Sarasota Music Festival, and the Boston University Tanglewood Institute. During his undergraduate degree, Harrison was a teaching assistant for Marc Goldberg at the Juilliard Pre-College. He lead reed-making classes, assisted in lessons, mentored students in orchestra, and coached chamber music. He now maintains his own private studio, and frequently leads sectionals for both the Baltimore Youth Symphony Orchestra and Howard County Youth Orchestras. Harrison has been on faculty at the Philadelphia International Music Festival, and the Interlochen Center for the Arts’ 2019 Summer Camp and has presented masterclasses at the Juilliard School, University of Toronto, Manhattan School of Music, and the University of North Carolina Greensboro. This summer Harrison will be on faculty at the inaugural season of Hidden Valley’s Festival of Winds.