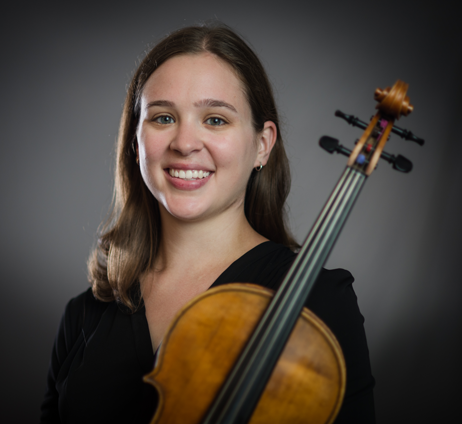 Helen Hess is one of the newly appointed section violists of the Baltimore Symphony. She has spent the last three years as a Fellow with the New World Symphony in Miami, FL under the baton of Michael Tilson Thomas. Helen is a former principal viola for the Civic Orchestra of Chicago as well as one of eight Civic musicians chosen to participate in the pilot season of the orchestra’s Citizen Musician Fellowship. In a Civic performance in the spring of 2013 she was featured alongside Yo-Yo Ma, the Chicago Symphony Orchestra’s Judson and Joyce Green Creative Consultant, in Strauss’s Don Quixote. She has played with a number of other orchestras in the Midwest including Northwest Indiana Symphony Orchestra, Illinois Symphony Orchestra and Dubuque Symphony Orchestra, and has played as a member of the Artosphere festival in Fayetteville, Arkansas.

While at New World, Helen had the opportunity to mentor local high school students through in school coachings, sectionals and side-by-side performances. In her last year she participated in their partnership with the Iberacademy in Medellín, Colombia where she taught private lessons and led sectionals for the orchestra. She has also traveled to Guangzhou, China to act as adjunct faculty in the Youth Music Culture Guangdong workshop. In that role Helen provided another level of leadership between participants and faculty, as well as participating in all performance aspects of the workshop: chamber ensemble, Silk Road Band and orchestra.

As a chamber musician Helen has attended festivals such as The Meadowmount School of Music and the St. Lawrence String Quartet Chamber Music Seminar at Stanford. During her time in Chicago, Helen and fellow musicians collaborated with choreographer Lin Kahn on her dance piece, SEVEN, arranging and providing music for a number of the dances.

Originally from White Plains, NY, Helen received her Bachelor’s degree from The Boston Conservatory and her Master’s Degree from DePaul University School of Music. Past teachers include Rebecca Eckfeld, Patricia McCarty and Rami Solomonow.