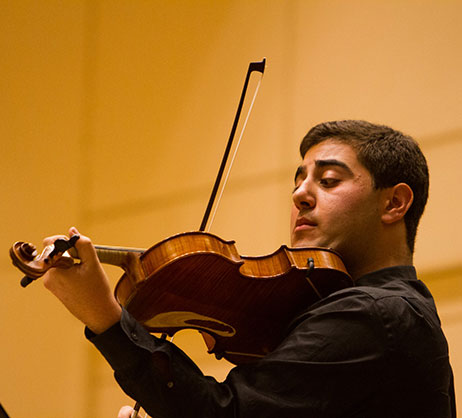 Appointed Fourth Chair Viola of the Baltimore Symphony Orchestra in 2016, Massachusetts native Jacob Shack earned his Master of Music degree at The Juilliard School as a student of Misha Amory and Heidi Castleman and frequently performed as co-principal of the Juilliard Orchestra. As an undergraduate at Harvard College, Jacob enjoyed playing with the Harvard-Radcliffe Orchestra as principal violist, including on their tours to Cuba and the Middle East. He has toured the world as a chamber and orchestral musician, performing on four continents, most recently in Hong Kong at Bright Sheng’s Intimacy of Creativity Festival and in Colombia at the Medellín International Music Festival. He has performed at several other music festivals, including the Aspen Music Festival, the Sarasota Music Festival, Spoleto Festival USA, and the Tanglewood Music Center, where he was the recipient of the Maurice Schwarz Prize in 2013. In addition, he was selected to participate in Jaime Laredo’s New York String Orchestra Seminar at Carnegie Hall in both 2010 and 2012. In addition to his dedication to orchestral playing, Jacob has been recognized in solo and chamber music competitions, including the Washington International Competition for Strings and the Stulberg International String Competition. He has collaborated in performance with such world-renowned artists as James Buswell, Steven Doane, James Dunham, Joseph Kalichstein, Robert Levin, and Joseph Silverstein, and has received numerous awards and scholarships from Harvard University, as well as from his alma mater Phillips Academy. In the summer of 2015, Jacob served as the violist of the New Fromm Players, an ensemble-in-residence at the Tanglewood Music Center devoted to contemporary music performance.