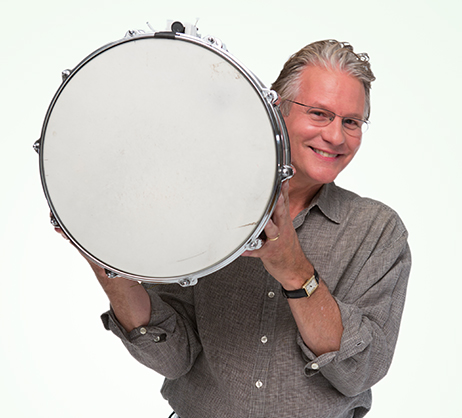 There were actually three people who pointed me in the direction of the arts and music. First, my mother played the piano and introduced me to the joys of music making. Second, my first real teacher was a man named Tony DeNicola. Tony was a big band drummer who played in the Harry James Big Band for many years. He taught me to play non-melodic percussion instruments like the snare drum with a melodic sense and with a musical line. The third was John Soroka, a former principal percussionist with the Baltimore Symphony and teacher at Peabody. I would never have made it into the BSO if it weren't for him. John taught me to really push myself to new heights, both technically and musically. Whoever thought that making music and playing in an orchestra was actually a career? Sometimes, I still can't believe it.

Although music is an important part of my life, it is by no means my only passion. I am still interested in so many things. If I weren’t a musician, I would definitely be a chef. I love to cook! My two grandmothers taught me at a young age, how to bake and cook , and cooking as been an important part of my life since then. I often fantasize about being a professional Chef—an outstanding and highly trained one like my cousin, John Piliouras, who was a chef at Molyvos, a restaurant near Carnegie Hall in New York City . When I’m not cooking, I’m reading about cooking! I have taken books out of the library on knife technique and knives, garnishes, hors d'oeuvres, cakes, breads, desserts and more and even subscribe to a couple of cooking magazines.

I have had a couple of old British cars, one of which I am constantly working on which uses up quite a bit of my time away from the BSO. I also run a company that makes small percussion instruments: “Locke Percussion.” In addition, I teach at The Baltimore School for the Arts, the Peabody Institute, and Goucher College. So life is busy.

But never too busy for the most important people in my life: my family. My wife Kathryn, who is a pianist, and son John Edgar are incredibly supportive of my endeavors. My son and I share time playing baseball, skiing, or biking to Pennsylvania. We are quite a team, especially when it comes to our shared love for cycling. I used to be the one coaxing him to join me; now he’s saying, “come on, dad—let’s go!”