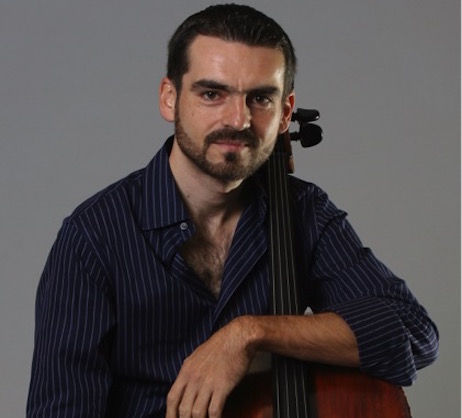 “A great talent like Lukasz Szyrner comes along infrequently . . . . [and] is without a doubt an outstanding instrumentalist who has a brilliant technique and a vivid talent....” Stephen Kates, Professor of Cello at The Peabody Conservatory. “... the Sonata for Unaccompanied Cello, played beautifully by Lukasz Szyrner.” The Washington Post... Born in Poznan, the musical capital of Poland, he began his studies at the age of seven. A recognized child prodigy, Mr. Szyrner was performing in the Poznan Philharmonic Orchestra when he was ten and made his solo debut with the orchestra at fourteen performing the Saint-Saëns cello concerto. He was the youngest Master’s graduate of the Jan Paderewski Music Conservatory in Poznan, studying under Prof. Stanislav Pokorski. He continued his studies with Karine Georgian at the Hochschule für Musik in Detmold, Germany.

Since coming to this country he has studied at The Peabody Conservatory with cellist Stephen Kates, and with cellist Laurence Lesser at the New England Conservatory of Music. By age twenty, Mr. Szyrner had won top prizes in music competitions worldwide including the International Nicanor Zabaleta Competition for Strings in San Sebastian, Spain; the Irving M. Klein String Competition in San Francisco; the Mary Graham Lesley International Music Competition; the Yale Gordon Competition; the International UNESCO competition for Young Musicians; and the D’Angelo Young Artist Competition. He was a semi-finalist in the Leonard Rose Competition, and semi-finalist in the Tchaikovsky Competition in Moscow. In 1993, he was the recipient of the Glos Wielkopolski “Medal of Young Art” award for his artistic achievements in Poland and abroad. Over the years in addition to an active recital and chamber music career, Mr. Szyrner has soloed with many orchestras in Poland as well as in the United States. He has spent summers performing at numerous festivals such as the prestigious Ravinia Festival; the Piatigorsky Seminar in Los Angeles, CA ;  the Heifetz International music Institute; the Endless Mountain Music Festival. Mr. Szyrner made his debut on compact disc with the Swedish recording company, Chamber Sound, and has performed for radio and television in Poland, Sweden, and Germany. In recent seasons he has travelled to perform in Italy, Argentina, Uruguay and Costa Rica as a member of Quin Tango, a group devoted entirely to tango music.