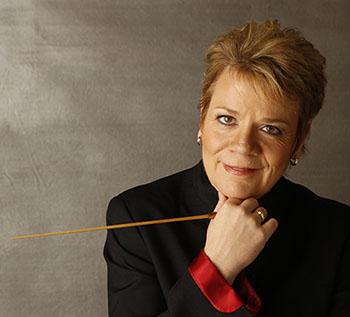 Marin Alsop is an inspiring voice who believes that “music has the power to change lives.” She is recognized for her innovative programming and for her commitment to education and to the development of audiences of all ages.

Alsop conducts the world’s major orchestras, including the Leipzig Gewandhaus, Royal Concertgebouw, Chicago Symphony and the London Philharmonic orchestras. In 2013, she became the first female conductor of the BBC’s Last Night of the Proms.

As a protégé of Leonard Bernstein, Alsop was central to his 100th-anniversary celebrations, and conducted Bernstein’s MASS at the Ravinia Festival, where she served as Musical Curator for 2018 and 2019. Her extensive discography includes a highly praised Dvořák cycle with the BSO. Her dedication to new music is demonstrated by her 25-year tenure as Music Director of the Cabrillo Festival of Contemporary Music and her launching the BSO’s New Music Festival in 2017.

Alsop is the only conductor to receive the MacArthur Fellowship and she is Director of Graduate Conducting at the Peabody Institute. She attended the Juilliard School and Yale University, which awarded her an Honorary Doctorate in 2017. 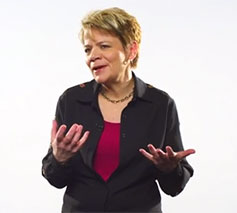 Music Director Marin Alsop dishes on Bernstein's Candide. Watch it performed by the BSO and guests including Patti LuPone during the 14-15 season!