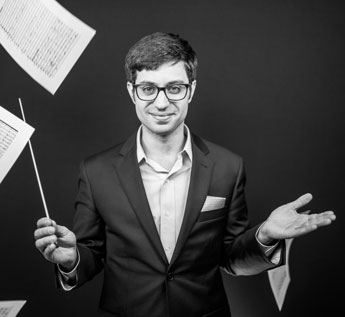 Named a "versatile and energetic conductor” by The Baltimore Sun, Nicholas Hersh continues to earn acclaim for his innovative programming and natural ability to connect with musicians and audiences alike. As Associate Conductor of the Baltimore Symphony Orchestra (BSO), Hersh strives to expand the reach of orchestral music—most notably through BSO Pulse, a concert series that brings together indie bands and symphony musicians in unique collaborations.

Hersh conducts the BSO in a set of subscription concerts each season, utilizing the Off The Cuff format to familiarize new concertgoers with the orchestral repertoire. A regular guest of the National Symphony Orchestra, he made his subscription debut in 2019, stepping in last minute for an indisposed Yan Pascal Tortelier. Other guest conducting appearances have included the Houston, New Jersey, Phoenix, North Carolina and New World symphonies, as well as the Rochester Philharmonic. Debuts in the 2019-20 season include the Atlanta and Virginia symphony orchestras; the Sarasota Orchestra; and the Louisiana Philharmonic Orchestra.

An avid educator, Hersh serves as the Artistic Director of the Baltimore Symphony Youth Orchestras and directs the BSO’s educational and family programming, including the celebrated Academy for adult-amateur musicians. He is a frequent collaborator and guest faculty at the Peabody Institute as well as the BSO’s OrchKids program for Baltimore City schoolchildren.

Hersh grew up in Evanston, IL and started his musical training on the cello. He earned a bachelor’s degree in music from Stanford University and a master’s degree in conducting from the Indiana University Jacobs School of Music, studying with David Effron and Arthur Fagen. In 2011 and 2012 he was a Conducting Fellow with the prestigious Aspen Conducting Academy at Aspen Music Festival and School, studying with Robert Spano, Hugh Wolff and Larry Rachleff, and has participated in masterclasses with Bernard Haitink and Michael Tilson Thomas. Hersh is also a two-time recipient of the Solti Foundation Career Assistance Award.

Hersh is frequently in demand as an arranger, taking on anything from classical solo and chamber music to popular songs—adapting them for orchestra in an idiosyncratic, playable style. His symphonic arrangement of Queen’s “Bohemian Rhapsody” continues to see worldwide success as a viral YouTube hit, and he has had his work performed by orchestras around the globe.