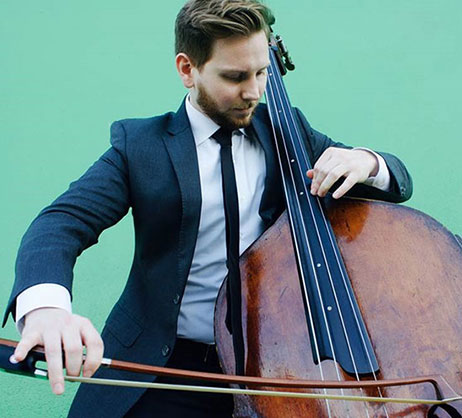 Double Bassist Timothy Dilenschneider is a native of the Philadelphia area and a newly appointed section bass player for the Baltimore Symphony Orchestra. He has been a frequent substitute for the Philadelphia Orchestra and has performed with that orchestra on tours across Europe and Asia. Before joining the BSO, Mr. Dilenschneider was a member of the New World Symphony, based in Miami Beach, FL, under the baton of Michael Tilson Thomas.

Mr. Dilenschneider is a 2014 graduate of the Curtis Institute of Music, where he studied with Hal Robinson and Edgar Meyer. While at Curtis, he performed with the Allentown, Lancaster and Harrisburg Symphony Orchestras, along with Symphony in C (formerly Haddonfield Symphony) and the Bryn Mawr Chamber Orchestra. Mr. Dilenschneider has been a fellow at the Aspen Music Festival and School, performing with the Aspen Chamber Symphony and Aspen Music Festival Orchestras. He has also been a fellow at the Pacific Music Festival in Japan and performed with the PMF orchestra as principal bass.

In addition to his orchestral work, Mr. Dilenschneider has performed in numerous recitals and was invited to participate with “Curtis on Tour” – on their tour around New England and on their “East Coast 2×4” Grammy award winning CD. He has participated twice in “WaBass – Institute for the 21st Century Bass Player,” and was featured in the summer 2014 edition of the online magazine Next Level Bassist as an “up and comer.” Recently, he was interviewed for the “Contrabass Conversations” podcast and wrote an “In the Zone” article for the 39th volume of Bass World, the official magazine of the International Society of Bassists.

Mr. Dilenschneider has performed in some of the world’s most notable halls including Concertgebouw in Amsterdam, Carnegie Hall in New York, Musikverein in Vienna, Suntory Hall in Tokyo and the Theatre des Champs-Elysées in Paris. In June of 2016, he joined the New York Symphony Ensemble on their tour across Japan, where he performed and worked with students participating in local youth orchestra side-by-sides.

Mr. Dilenschneider began playing the double bass at age 8 and studied with Time for Three Bassist Ranaan Meyer, prior to his studies at the Curtis Institute of Music.