A sing-along celebration of the BSO's 100th anniversary, featuring the 1914 city anthem, "Baltimore, our Baltimore."

Presented by FlowerMart and the Musicians of the Baltimore Symphony Orchestra

Come join the musicians of the Baltimore symphony Orchestra to celebrate their 100th anniversary and pay homage to the 1914 Baltimore City Anthem, “Baltimore, our Baltimore.” On September 11 at the FlowerMart in Baltimore, symphony musicians will form a concert band similar in size and presentation to its roots in 1915, when Mayor Preston determined the need for a municipally-funded symphony orchestra. In addition to marches and incidental music, the performance will focus on the singing of "The Star-Spangled Banner" and "Baltimore, our Baltimore" as directed from the stage. Words to the songs will be displayed on banners hanging from the Peabody Institute of Johns Hopkins University, right across the street from the Mrs. Clarisse Mechanic Stage on West Mt. Vernon Place next to the Washington Monument.It is an appropriate way to acknowledge an important day and will historically recognize the birth of our city’s treasured orchestra.

Join the BSO to commemorate this unique moment in our history with music and song.

Parking: $3 All Day Parking will be available at the garage on the corner of North Charles Street and West Franklin Street.

Baltimore, where Carroll flourished
And the fame of Calvert grew!
Here the old defenders conquered
As their valiant swords they drew.
Here the starry banner glistened
In the sunshine of the sea,
In that dawn of golden vision
That awoke the song of Key;
Here are hearts that beat forever
For the city we adore;
Here the love of men and brothers –
Baltimore, our Baltimore!

Here the clipper ships of story
Brought the cargoes of their day,
From the ports of seven oceans,
Homing white winged up the bay.
Here immortal Poe illumined
Living letters with his lyre;
Here Lanier’s uplifting measures
Taught the world a fresh desire;
Here the tradesman and the statesman,
Here the gallant hearts of yore,
Came to build a beauteous city –
Baltimore, our Baltimore!

The words and music of this anthem were each awarded — after a national competition — a prize of $250 offered by the Mayor of Baltimore, the Honorable James H. Preston.

O say can you see, by the dawn's early light,
What so proudly we hail'd at the twilight's last gleaming,
Whose broad stripes and bright stars through the perilous fight
O'er the ramparts we watch'd were so gallantly streaming?
And the rocket's red glare, the bomb bursting in air,
Gave proof through the night that our flag was still there,
O say does that star-spangled banner yet wave
O'er the land of the free and the home of the brave?

First verse of the complete version of "The Star-Spangled Banner" showing spelling and punctuation from Francis Scott Key's manuscript in the Maryland Historical Society collection.

Presented in part by: 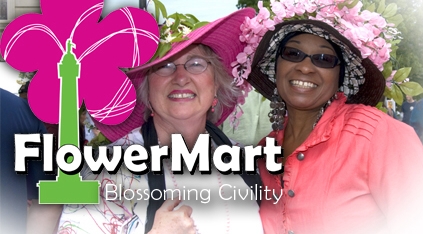