Without question the violin (and its string family members) has one of the most recognizable shapes in music.

Part math and science and part craft and artistry, the curvy figure-eight shape that developed and became standardized, is iconic — and perhaps because of that iconic status it is occasionally ripe for designers and artists who want to heretically wipe the slate clean and reimagine the instrument from scratch. Take this radical redesign set to make its debut next month. 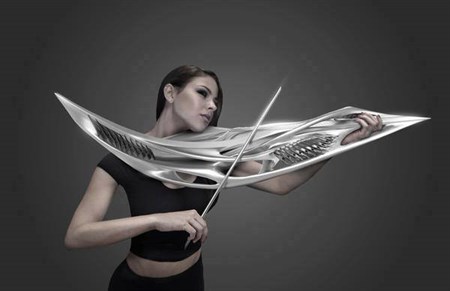 While it brings to mind a Klingon Bat’leth from Star Trek, it is in fact a two-string piezoelectric violin. The violin is one of five 3D-printed instruments for a new art installation titled “MULTI” due to open at New York’s Javits Center in mid-April. Designers Eric Goldemberg and Veronica Zalcberg of MONAD studio worked on the aesthetic and design of the instrument while musician and artist Scott Hall is designing the core elements that make the violin playable.

In honor of the MONAD instrument, here is a look at five other radical makeovers of the violin that aimed to rethink the violin’s iconic shape either for pragmatic or purely aesthetic reasons.

Looking like something out of a steampunk sketchbook, the Stroh Violin was designed with a pragmatic purpose. In 1899, John M.A. Stroh of London patented his design that replaced the traditional wooden body of a violin with a directional horn, borrowing from early gramophone designs. The Stroh Violin is meant to increase the volume of a traditional violin. The smaller horn is aimed into the ear of the person playing the instrument while the larger horn is aimed at the audience. The Stroh never rivaled the traditional violin design, but it found a niche in early music recordings when an entire ensemble had to be arranged to be recorded by a single horn. The Stroh Violin’s ability to aim its sound into the recorder meant a recording could pick up the Stroh sound more easily than a traditional violin ­– even if that sound sacrificed some quality.

The Rickenbacker and Viper electric violins

Many of the most unusual violin shapes belong to electric violins that no longer relied on the instrument’s body to produce acoustic sound. One of the earliest electric instruments came from the Rickenbacker company in Los Angeles which patented an electric violin design in 1935. The futuristic Rickenbacker “electro” is molded from Bakelite plastic and relied on magnetic pickups to amplify sound. The instrument was a commercial failure and scrapped when the company found success making electric Hawaiian guitars.

By the 1970s, few companies dabbled with fully electric violins, instead preferring acoustic instruments that had electric amplification. One of the most influential electric violins designs was created by Mark Wood — a luthier and member of the rock group Trans-Siberian Orchestra. Wood designed the “Viper,” which is a solid body electric violin that models its shape on the Flying V guitar from Gibson. Wood played the Viper throughout his rock violin career, and Vipers are commonly available through his violin company.

While other instruments on this list might have some pragmatic intent to their design, Alex Sobolev’s triolin is more art installation than practical musical instrument. The triolin (not to be confused with a nail violin variation by artist Hal Rammel that has the same name) was created in 2009 by Sobolev who is a designer based in Michigan. Sobolev wrote that his triolin hoped to challenge the idea of the violin as a solo instrument by creating a space that required physical interaction where three performers could play the instrument at once.

Though not a violin, the Pellegrina viola is designed to solve a problem created by the violin shape. The figure-eight shape was essentially scaled up (with a few proportion changes) for all members of the string family. But when the violin is scaled up to play in the range of a viola, it is a little too large to be played comfortably under the chin, and some suggest that the instrument would be better played between the knees like a cello. The slightly cumbersome size of the viola can cause back issues, carpal tunnel or shoulder strain.

In 1993, violinmaker David Rivinus hoped to make a more ergonomic viola when he designed the Pellegrina. The instrument maintains the acoustic capacity of a traditional viola but shortens its length, making it easier to handle. It accomplishes that with a somewhat strange-looking solution that conductor Michael Tilson Thomas told The New York Times in 1997, caused him to double take at the “Salvador Dali viola” one of his San Francisco Symphony musicians brought to rehearsal.

The squidolin is an electric teaching violin and the brainchild of designer Carlos R. Mendez. The violin can be plugged into a television and guide the player through a series of lessons starting with how to hold the bow. If the squidolin is plugged into an amplifier, it will also play like a regular electric violin.

While Mendez had a pragmatic purpose for the squidolin (which does take its name from its resemblance to a squid), he also looked at areas where he might improve the traditional violin design. Mendez told Gizmag that when he studied the violin shape, he felt that the chin and shoulder rests felt like afterthoughts and so he hoped to better incorporate those elements into the overall shape.