“I’m not sure why,” legendary psychiatrist Sigmund Freud reportedly said, “but the trombone makes me very uncomfortable.”

Perhaps for Freud it wasn’t so much the instrument he found distressing as the people the instrument attracted. Trombone players (author included) have something of a reputation among other musicians for being a little different, and that can sometimes lead to looking to push some ill-advised boundaries.

Take for example trombonist Valentin Guérin at the University of Texas who wondered “why can’t a trombone also be a flamethrower?”

Guérin said he hopes his career combines both music and pyrotechnics, and his “pyro-trombone” is at the center of a crowdfunding campaign to raise money for the UT Trombone Choir’s trip to the International Trombone Festival — complete with an option for a potential concert with your donation.

The heat from the fire will raise the pitch of the horn and possibly even deform the brass, but when Guérin talked to the University of Texas Alumni Association’s magazine Alcalde, he seemed to take that small detail in stride.

“The worst thing that can happen is the instrument bends a bit, and then you just bend it back,” he told the publication. “You can do anything with a trombone.”

As tribute to the noble sackbut tradition that boasts outside-the-box thinkers like Guérin, below is a look at other slightly unorthodox uses for the mighty trombone.

1. Really though… a flamethrower

Any good idea is worth repeating, and among trombone players, making a flamethrower appears to be a good idea. Trombonist Jonathon Crawford uploaded one of the first attempts at the concept to YouTube in 2008. The instrument is powered by propane and a barbecue ignition system.

What is notable is that the idea is evolving and becoming further refined. By 2011, a trombonist named Scott in Jackson, Missouri, took the idea and developed his own “flamebone,” making innovations on Crawford's idea such as using a compressed air system and actually going outside to play the thing. In his description he said the instrument has a 21-foot fireball range but can be difficult to play because of the recoil. If the comment section full of pleas for blueprints and instructions on how to make your own flamebone are any indication, the desire to marry brass and flame is held by many.

Valentin Guérin has a patent pending on his pyro-trombone, which appears to be the leader in the clubhouse in terms of balancing playability with amount of fire produced. Guérin writes that he was inspired to create the instrument after observing that audiences can find classical trombone concerts a bit dull. His website offers videos of him testing prototypes as well as a performance of Arthur Pryor’s Fantastic Polka that certainly is not dull.

The arms race to weaponize the trombone is clearly on. There is an urban legend stemming from a 1998 online article featuring a story of an overzealous bass trombonist who opted to add to the cannonade in Tchaikovsky’s 1812 Overture by sticking the equivalent of a quarter stick of dynamite down his bell. The story has been debunked and featured on Discovery’s Mythbusters, but there is probably a reason an urban legend that continues to have legs on the Internet is about a trombone player and not an oboist.

It can be hard to be a rock guitar hero when your chosen instrument is trombone, but not impossible. In recent years there has been a lot of new equipment put on the market that can turn a trombone into something approximating an electric guitar by feeding the sound from a mute through an amplified set up. The Maniacal 4 trombone quartet used this set up in the above video for the guitar solos in Kansas’ “Carry on My Wayward Sun,” and you can see more of this type of set up in a video by trombonist Hadyn Godfrey who does a passable Jimi Hendrix impression.

Electronic music composer Nicolas Collins electrified the trombone in a very different way. Rather than trying to make the trombone sound like a previously existing instrument, he used the horn as a piece in a new electronic instrument. In 1988 Collins saw the slide mechanism in a trombone as an ideal way to control inputs in a digital signal producer. “The slide became my mouse,” he writes. The result of a $12 trombone, a retractable dog leash and a lot of customized computer parts was an instrument called “trombone-propelled electronics.” 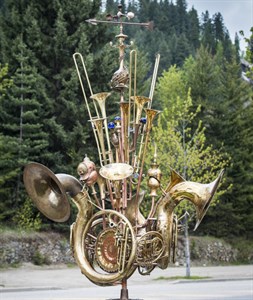 At some point, many trombones are retired to spend their remaining lives gathering dust in a pawn shop or former musician’s basement. Fortunately, there are quite a few creative minds out there trying to find a use for abandoned instruments. British Columbia-based sculptor Douglas Walker has regularly used trombones and other brass instruments to create fountains and large artworks like his piece 76 Trombones (featured above). Similarly, artist Christopher Locke has found a use for old trombones and other brass instruments by converting them into acoustic iPhone amplifiers. For the do-it-yourself crowd, the Internet is full of examples of old trombones that have been converted to decorative floor lamps — often made by begrudging parents of a former student musician.

Kansas farmer Derek Klingenberg has become a YouTube celebrity in large part due to his trombone and musically appreciative cattle. Klingenberg studied agriculture at Kansas State University, but he also played trombone in the marching band. Klingenberg’s cattle don’t seem to be alone in enjoying music. The New Hot 5 jazz band found French cattle quite receptive a few years back. 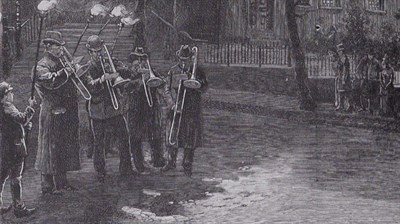 Engraving of Moravian trombone choir circa 1888

One of the earliest organized instrumental music organizations in America was a trombone choir, brought to Pennsylvania by the Moravian Church in 1754. The Moravians are a Protestant denomination who left Europe to avoid persecution and serve as missionaries to the Native American population. Music and particularly the trombone choir was an integral part of Moravian religious life.

Historian Frank Whelan writes that in 1755 the Moravians — who fled war in Europe — found themselves in the middle of the French and Indian War where colonial and Native American armies served as surrogates for French and English power. Whelan continues that Moravians in the Pennsylvanian town of Bethlehem heard rumors of an attack by one Native American group on Christmas Day. However, they continued their observance of the holiday by having the trombone choir play from the church belfry. There are differing accounts on what happened next. According to legend, the unexpected sound of the trombone choir frightened the would-be attackers, saving the Moravian and Native converts who lived in the city. Whelan also said that according to others there never was a planned attack. Regardless, (assuming it is a non-flamethrower variant) a little trombone music never hurt anybody and might have saved a city in peril.