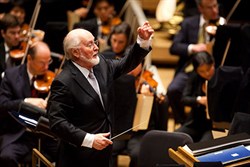 John Williams is nominated for yet another Oscar this year, this time for his work on “The Book Thief.” With 49 nods, the composer ranks as the second most nominated person in Academy Awards history, only behind Walt Disney’s 59. (His 44 nominations for Best Original Score are one more than Alfred Newman’s 43.)

But before “Jaws” and “Star Wars” and even before his first Oscar nomination for 1969’s “Valley of the Dolls,” John Williams—or Johnny Williams as he was known back then—wrote TV themes. Lots of them. In many, you can hear Williams’ penchant for drama and brassy bravado that would foretell his foray into film scores. In others, you hear bongos. Take a listen to some of our favorites—and not-so-favorites.

For what is probably the most recognizable of Williams’ TV themes, the composer borrowed heavily from Bernard Herrmann’s 1951 work on “The Day the Earth Stood Still.” It relies more on funky brass than strings, and if you try really hard, you can almost hear a little “Star Wars” fanfare in the mix. Much of the series’ incidental music was scored by Williams as well as Alexander Courage, who wrote the theme to “Star Trek.” Creator Irwin Allen asked Williams to create a new theme for Season 3, which he did, producing a bolder, up tempo version, which we prefer.

More “big” horns in the theme music to this series also created by Irwin Allen. In the pilot, a spaceship from Earth crashes on another Earth-like planet but with people far taller than players on the New York Knicks. Allen relied heavily on Williams to set the mood and his music runs nearly nonstop for the show’s 50-minute length.

Bonus: “The Time Tunnel,” yet another sci-fi offering from Allen that lasted only one season. You can really start to hear the similarities between all Williams’ themes here.

This show is notable for being one of the quickest to be canceled in the 1960s. The primetime sitcom, which aired on ABC-TV during the 1966-67 season, lasted only four episodes before being pulled. Williams wrote the theme music, as well as the incidental music for all the episodes but the first. Not the maestro’s best work. Stick around to the :30 second mark when the Muppet-like voices pipe in.

Bonus: Take a listen to Williams’ incidental music, which he wrote during the 1959-60 season for “Bachelor Father,” starring John Forsythe in the title role. Williams can sling “playful comedy,” too!

Holy drama! This one must have scared quite a few children who were up past their bedtimes to catch this show, which ran weekly at 10 p.m. on NBC from 1963-65.

We throw in this short-lived 1980s fantasy/sci-fi/horror anthology created by Steven Spielberg to demonstrate how Williams’ sound evolved from his earlier work, but remained quite similar. It’s got the same brassy drama, a few punctuating kettle drums, and a dose of swelling strings. The music still stirs, but like everything else created in the ‘80s, it lacks the interesting edge of the 1960s themes.

Yes, Gilligan’s Island. This one’s a must-listen, not only for its awful lyrics (the famous “three-hour tour” was originally six? Wha?), but for how completely different it is from the Sherwood Schwartz version that replaced it. Johnny Williams was obviously instructed to create for the pilot “something that sounds like Harry Belafonte.” This doesn’t. Like the ill-fated “S.S. Minnow,” it’s a wreck.