What happens when you put 70 to 90 right-brained, artistically inclined individuals in a creative environment that features occasional down time and constant access to pencil and paper? Well if that group happens to be rehearsing John Williams’ film score to Jaws, you’re likely to get shark doodles.

Make no mistake, orchestra rehearsals are a serious affair, and a look at musicians’ sheet music will reflect that. Musicians take careful notes in rehearsal — adding marks for string bowings, where to take a breath, phrasings, dynamics or reminders on how a conductor wants a particular passage played.

Because of a demanding performance schedule with limiting rehearsal time, those notes are valuable to musicians. Particularly in a professional orchestra where some longtime members will play some of the same pieces a dozen times over their career, those markings save time and can represent generations of accumulated musical advice on how to perform a piece.

But often, mixed in with those musical instructions, you’ll find unorthodox markings, a stray illustration or inside jokes written for the benefit of a stand partner.

The men and women who have the best seat to watch this side of musician culture are the orchestra librarians. Librarians are crucial but often unseen members of the orchestra. They have to audition for their position, earn tenure and are members of an orchestra musicians’ union just like performers. They are responsible for caring for and preparing all of an orchestras’ music, which requires them to make markings and customize players’ parts to make performances go smoother.

“Preparing parts and scores is sometimes a deduction game where we have to decide what needs to come out and what needs to stay,” said Michael Ferraguto, who has served as principal librarian for the Baltimore Symphony Orchestra since 2015.

The markings he and other librarians find in sheet music often tell a story. For example a common note he comes across is “VS,” short for the Italian phrase “Volti Subito,” which practically translates to “Turn the page quickly. You have music to play right away after the page turn.”

“The bigger and more hastily marked you see those, the clearer it is that it was a bad page turn in performance,” Ferraguto explained. “If I'm bowing parts and I see a big, sloppy ‘VS’ or ‘Turn now!’ I'll look for an opportunity to fix the page turn if I can because I know it will save drama next time.” 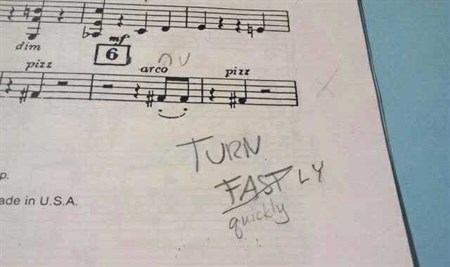 Sometimes though, the notes he’ll find are a little less traditional. Orchestra musicians playing in an opera pit might write notes about when big crashes or a gun shot occurs on stage. Ferraguto said he once had to ask horn players about what “R.E.P.” and “L.E.P” meant to figure out whether that was a marking they wanted kept in their parts. It turns out that stood for “right/left ear plug” to indicate when a particularly loud part in the percussion or brass would play behind them.

“A lot of times conductors will say things in rehearsal that can end up with some funny notes [in the music],” Ferraguto said. "Sometimes a conductor might say, 'Oh, play this more chocolatey.’ And nobody really knows what that means, but half the orchestra will write ‘chocolate’ in their parts, and then you'll see ‘Hershey’ show up somewhere."

And then of course, there are the drawings and notes scribbled just for amusement. 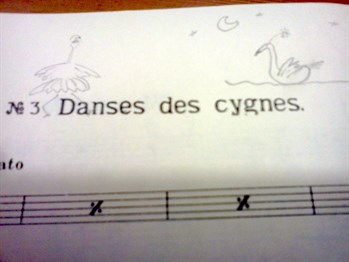 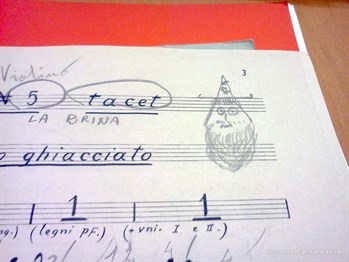 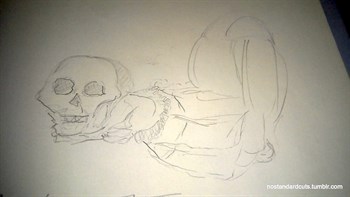 From top: Dancing swans, a wizard and poor Yorick (the last of which was drawn in Ambroise Thomas' opera adaptation of Hamlet)

“This happens more in the wind parts, but every so often you will get one with a string player,” Ferraguto said. “Wind instrument parts have more rests, which gives more time for the players to really refine and work on their doodles.”

Tacet movements — sections of a piece where players don't have a part to play but need to stay on stage — offer a lot of opportunity to get some doodling in. Tacet sheets are often blank with the Italian word "Tacet" (to remind a musician that, "no, you didn't lose a page, you just don't play anything here.") Ferraguto said he came across a tacet sheet another librarian had put together that included Sudoku puzzles to occupy the bored, usually-brass player.

"This comes up in pops concerts most often," he said. "Sometimes a player may have three or four tacet charts in a row. I made a few word searches for a recent holiday concert for some laughs." 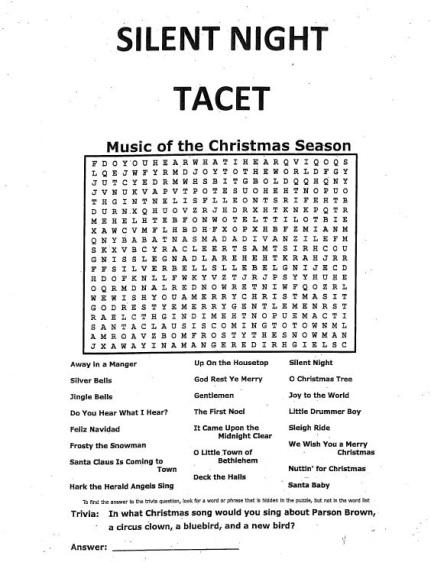 One common genre of marking is to add lyrics to an instrumental melody. The opening motif in Mozart’s Piano Quartet in G Major is famously given “An-swer the Telephone!” The opening to Mozart’s Symphony No. 40 is classically given “It’s a bird, it’s a plane, no it’s Mozart!” Ferraguto once came across a part for the score to Jurassic Park that managed to stretch out the syllables in “Dinosaur” to fit the main theme.

In 2011, Ferraguto was working at the Tanglewood Music Festival with two other young librarians where they started talking about the odd and often funny notes they came across and decided to find an outlet to share.

“We were always joking about the things that we had found,” he said. “Independently each of us had about a hundred photos on our cell phones of markings that we thought were funny.”

The resulting blog, No Standard Cuts, is a loving tribute and inside look at musician culture. Ferraguto and the other librarians, one of whom is librarian at a music conservatory, receive submissions from all over to be able to feature doodles and notes from musicians at all levels and across the world. 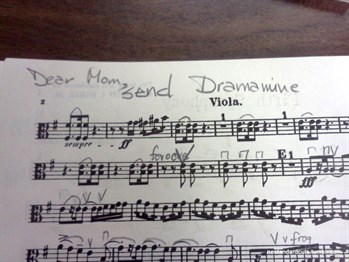 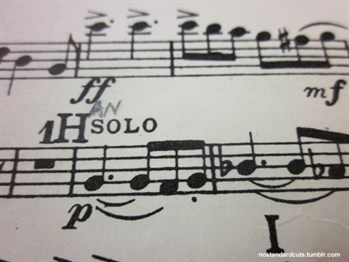 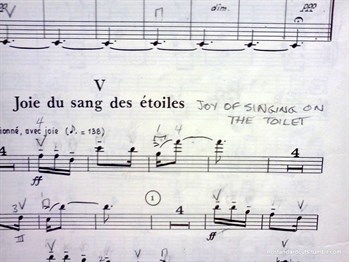 From Top: A cry for help, a Star Wars fan and a questionable French translation

This is as good a spot as any to include a disclaimer that the featured posts in this story predate Ferraguto’s time with the BSO, and he noted that the BSO musicians on the whole treat the music (most of which is owned by the orchestra) very well. While the BSO doesn't have a rampant doodle culture, Ferraguto said rental parts, which might have last been used by anyone from other professional orchestra to youth ensembles, are a great place to come across strange notes.

"Obviously people work hard on them," he said.

Ferraguto’s favorite markings are the ones that tell a story about something that happened in practice. In one percussion part, there was a section with 5 measures of rest. Unfortunately for that percussionist, the font used in the music made the number 5 kind of look like a 3. And to make matters worse, what followed those rests was a dramatic bass drum hit and cymbal crash — not the most subtle part for an early entrance. 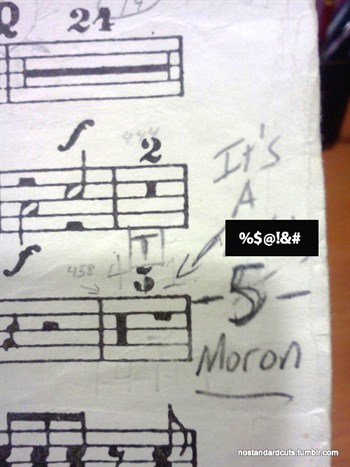 To be fair, it really does look like a 3.

“You know in one rehearsal that somebody counted three bars and then played a giant cymbal crash where it wasn't supposed to be. It's that kind of thing you see in the music later and realize ‘Oh, something happened here,’” he said.

For musicians chasing ever-elusive perfection, the notes and jokes that get scribbled into their parts are an outlet for that artistic stress that might keep things relaxed. Sometimes there is some inter-orchestra sniping or caricatures (flattering or not so much), but for the most part doodles and non-musical commentary are the result of a productive environment with no shortage of creative individuals.

All images used were courtesy of No Standard Cuts. Check them out on Tumblr and Twitter for more amusing insights into the lives of musicians.