Music is Top Form of Entertainment

Concerns about revenue drops for the music industry are not hard to find these days.

But putting aside worries of shifting business models, technology and audience demographics for a moment, a recent study shows that the demand for the music itself is still quite healthy. According to Nielsen’s third annual Music 360 report on consumer tastes and habits, music is the top form of entertainment for Americans.

Of those surveyed, 93 percent said they listen to music and spend an average of 25 hours each week doing so. A lot of that time is a result of using music while doing other activities such as driving, surfing the Internet or working out.

The fact that music consumption is as widespread as it the survey shows is not in itself surprising. But the way we consume that music is slowly changing. According to Nielsen, smartphones are the third most popular device (behind radio and computer) to listen to music, and 39 percent of smartphone users say they have purchased music for their phone, which is up from 34 percent last year.

Overall radio, both broadcast and Internet-based, is the leading platform for music consumption at 59 percent, followed by users’ purchased libraries at 48 percent, on-demand services such as Spotify or Youtube and curated streaming services such as Pandora or iTunes Radio at 36 percent.

Nielsen also tracked where or during what other activities survey-takers listened to music. Participants reported that nearly a quarter of their time listening to music in a given week occurred in the car. 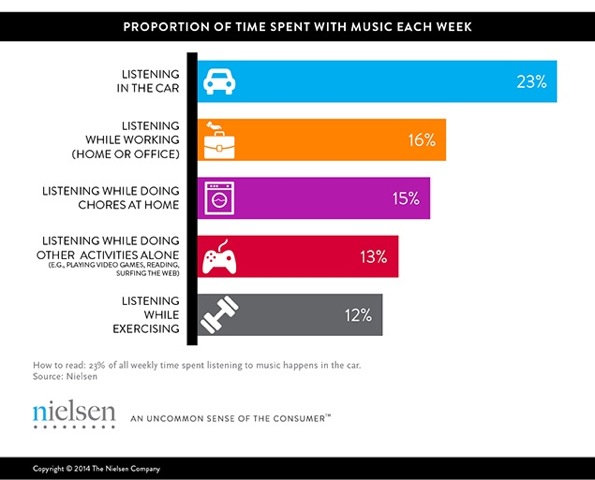