Music and visual art or design have always had a close relationship. Countless composers have found grist for their musical mill in their artistic response to a painting or sculpture. Usually that means channeling an artwork to write a new piece of music, but in the case of John Cage or a few others, that meant making the music on a page share some of that same visual language.

Likewise, artists often look to capture music in their own medium. In some ways, musical notation is a triumphant (if imperfect) act of visual design. We might sometimes take it for granted, but there is a logical visual language that is functional and aesthetically pleasing. The iconic treble clef evolved with both a purpose and beautiful calligraphy.

That symbolic language was a point of departure for designer Nicholas Rougeux in his recent project, Off the Staff. Rougeux wrote in his blog, “The beautiful complexity of sheet music beds for experimental notation, and I’m hardly the first, but I wanted to take my own shot at it.” 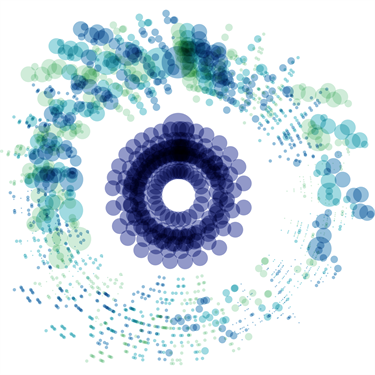 Johann Pachelbel's Canon in D from Off The Staff 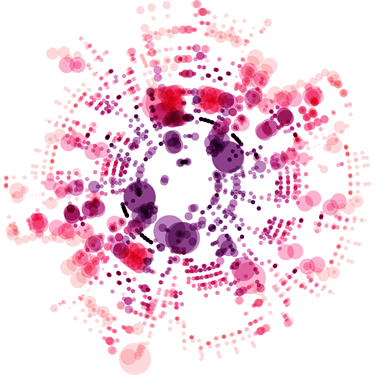 Allegro Movement of Eine Kleine Nachtmusik from Off The Staff

For projects like Rougeux’s, capturing music in art or design is a compelling challenge. Music is by its nature intangible. Many artists have looked for ways to translate that ephemeral form into a permanent object, and the results are varied and fascinating. 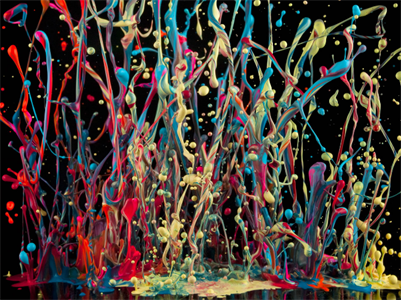 Martin Klimas is a German photographer who is fascinated with what music looks like. That idea has been a driving concept behind several of his projects, including one called Sonic Sculptures that looks part Jackson Pollock and Wassily Kandinsky. The process from the outside looks rather simple, but the result is compelling. Klimas spreads paint over a fabric scrim positioned above a speaker. Next he selects a piece of music to play through the speaker, sending the paint airborne, which he captures using high speed photography. It’s hard to say whether the difference in the final product comes more from the music that infuses the paint or the timing of the shots, but there is some conceptual allure that a splatter of paint is flying as a direct result of a soaring symphonic trombone line. 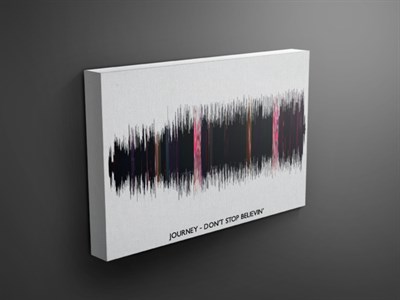 The advent of digitally recording music has also brought with it a new visual language to represent music. The sound wave file might have started only having meaning to audio techies, but very quickly it was incorporated into the user interface of everything from car radio consoles to MP3 software. It’s not a piece of information that necessarily needs to be front and center, but the peaks and valleys of a sound wave file have become a visual shorthand for music to consumers and producers alike. Each one is a sort of unique fingerprint or barcode for the music from which it derives, and they quickly communicate something of the musical structure (at least in terms of volume) to anyone —regardless of whether they read music.

For that reason, it is no surprise that many designers have made use of this digital music imagery. One of the more interesting variations is MusicDNA, a project of Rob Hansen and Garrick Darnell. MusicDNA creates printed canvases of its customers’ favorite music by overlaying that music’s wave file with corresponding colors sampled from corresponding points in a music video. 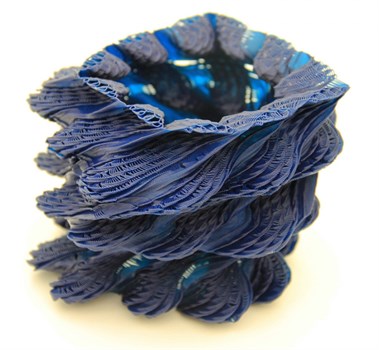 A totem for Wagner's "Ride of the Valkyries"

Reify is a start-up company focused on augmented reality (think Pokemon Go). Last year they started to promote a concept that turned music into sculptures, which could be read and played back on a phone through the company’s software.

The resulting sculptures — called totems — are somewhat impressionistic interpretations of the music. There is algorithm-driven logic to the shapes where the angles, jaggedness or size of the totem corresponds with the musical speed or length, but there is also some liberty given to the artists to tweak the final form which will be 3D-printed using a number of materials. 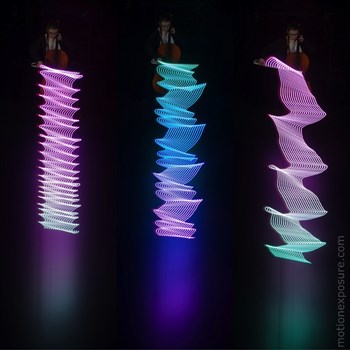 Stephen Orlando's photo series of the Bach Cello Suite No. 1

In the 1950s photographer Gjon Mili experimented with taking long exposures that could capture the movement of light over time in a single frame. His best known work using this technique was from a series he shot of Pablo Picasso painting with light for LIFE Magazine. Mili later used the technique with violinist Jascha Heifetz, where a light attached to the bow traced the movement of performance.

Canadian photographer Stephen Orlando was inspired by Mili and decided to apply some modern lighting options to update the technique. In a session with a cellist and violinist, Orlando attached a series of LED lights to the musicians’ bows. The LEDs changed color over time, and Orlando moved the camera to change the position of the light trail, resulting in a compelling image that captures the movement and something of the character of a piece in what is described as a “waterfall of light.”

While all of the work by designers and artists on this list look to somehow capture some elemental components of music in a visual language, the listening guides by the Toronto Symphony are unique in their goal to be educational. Sonata form is a musical set of rules outlining how composers (particularly in the Haydn/Mozart era) would create the opening movement of a symphony.

For music of that era, understanding the rules so that you can recognize how the composer creatively solved the problem of working within them is a great way to appreciate the music. However, usually that requires taking a college freshman level music theory or history class. Designers for the Toronto Symphony found a creative way to visually explain the structure of a piece using symbols, limited text and color that is interpretable by an audience regardless of whether they know (or care) about sonata form. 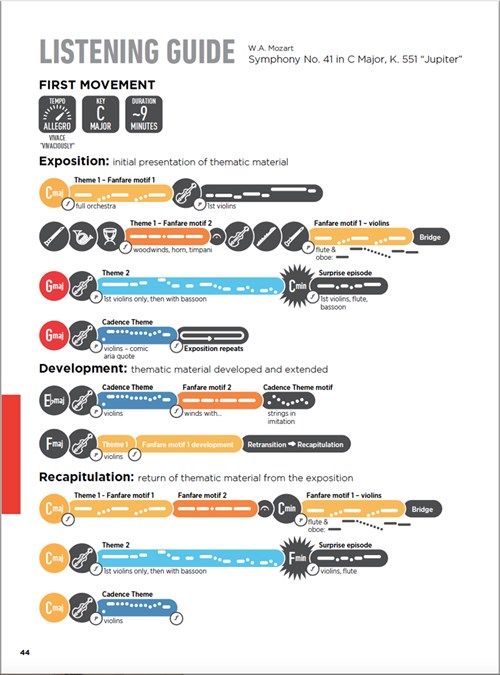