Sopranos in Space (and Other Unusual Concert Venues)

Just when you thought we were running out of notable firsts in music, soprano Sarah Brightman says she plans on singing in space.

The classical crossover artist Brightman announced in 2012 that she would visit the International Space Station as a tourist aboard a Russian Suyuz spacecraft. Speaking to RT this week, Brightman says she plans on doing some singing while up there. Her former husband Andrew Lloyd-Webber will write a piece, and the British soprano said she hopes to connect with an orchestra, choir or other singers on Earth for the performance.

If there has been one major trend in classical music in the 21st century, it’s a desire to bring the music out of the concert hall into new venues. Depending on who you ask, it can be viewed as either a form of musical ambassadorship where classical music meets its potential audience on their terms, or it can be thought of as a reclamation project in which classical music returns to the types of intimate chamber venues that once were common.

Alternative music clubs like (Le) Poisson Rouge in New York welcome classical music in a rock club setting. Locally, groups like Classical Revolution Baltimore bring chamber music and small ensembles to coffee shops and bars. Amid the flash mob craze of a few years ago, impromptu small- and full-scale orchestral concert productions showed up everywhere from shopping malls to train stations. To honor the 330th birthday of Johann Sebastian Bach on March 21, classical musicians will honor the composer with concerts in subways from New York to Los Angeles.

Space might not be on top of that list, but given the rising tide of classical music in unusual places, it really was only a matter of time. Below is a list of five of the more unexpected concert venues classical music has seen in in recent years. 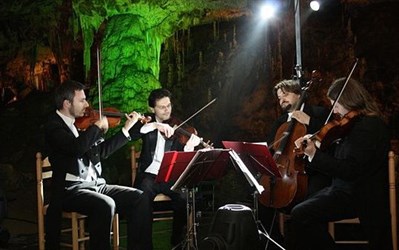 Considered to be one of the best string quartets in the Czech Republic, the Graffe String Quartet plays an annual concert in the ultimate “underground” venue of the Punka caves. Based in the Moravian Karst of the Czech Republic, the Punka Caves contain an underground river that passes through a stalactite-filled corridor before opening up to a domed cave, which is just big enough for a string quartet and small audience.

2. On a cattle ranch 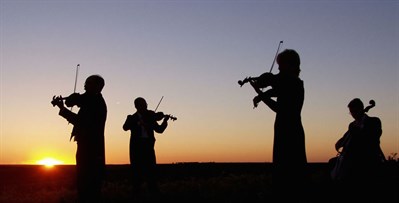 Billed by Modern Farmer Magazine as the Midwest’s answer to Burning Man, Symphony in the Flint Hills is an annual concert that started as a 1994 birthday bash for a Kansas rancher Jane Koger. Koger lived in the town of Matfield Green, a town with a population of 47 people according to the 2010 Census, but her birthday party that promised symphonic music at her ranch drew more than 3,000. The Symphony in the Flint Hills organization now holds an annual event focused on preserving the Tallgrass Prairie of the region with a symphony concert as the centerpiece that draws around 7,000, and the 2014 incarnation included a choreographed cattle drive of hundreds of Hereford-Angus heifers while the Kansas City Symphony played on. 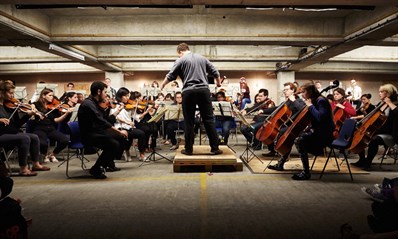 The Los Angeles opera company The Industry is planning on staging an opera this fall where its residents spend a lot of their time: in traffic. Company Director Yuval Sharon said audience members for the Opera HOPSCOTCH will get into one of 18 cars that will cruise around Los Angeles with musicians playing in the vehicle who will also interact with other musicians positioned at street corners or in other cars that pull up alongside the audience’s car. If a moving vehicle isn’t your game, the London Festival of Contemporary Music chose a parking garage (or car park) in London’s Peckham region as the site of eight days of experimental music making in the summer of 2013. The Peckham car park also hosts the Multi-Story Orchestra, who plays an annual concert in the garage since 2011.

4. In a swimming pool

In 2011, the I Love West Leeds Festival decided to hold a concert in the historic Bramley Baths. The West Yorkshire Symphony Orchestra (in traditional concert attire) set up on a makeshift stage in the center of the pool and appropriately performed Handel’s Water Music as audience members swam around and even under them. Presumably, cannonballs were prohibited.

5. At a soup kitchen

While many alternative-venue concerts have a mission to expose new audiences to classical music with hope that those listeners might one day find themselves buying a ticket to a concert hall, Music Kitchen operates with a very different goal. Created by violinist Kelly Hall-Tompkins, Music Kitchen brings classical musicians into soup kitchens and homeless shelters to provide “emotional and spiritual support to the disenfranchised.” The organization is based in New York City but has held concerts in Paris and recently Los Angeles’ Skid Row. The concerts also include top classical talent including performers like Emanuel Ax and New York Philharmonic Concertmaster Glenn Dicterow.