The Act of Conducting

Damon Gupton is not your typical orchestra conductor. If his phone’s ringback tone that plays the theme from the 1978 movie "Superman" isn’t a tip off, then his growing list of acting credits on IMDB should be.

Gupton has spent much of the past decade working dual careers in music and acting. This July 3 and 4 he will conduct the Baltimore Symphony Orchestra in its annual Star-Spangled Spectacular concerts at Oregon Ridge Park, and he will debut as a lead in the AMC-produced legal drama "The Divide."

"The Divide" is created by Richard LaGravenese and Tony Goldwyn — best known as President Fitzgerald Grant on ABC’s "Scandal" — and premieres on WE tv later this month. Gupton has also had roles in recent years on "The Newsroom," "Rake" and "Law and Order: Criminal Intent."

While working in two fields can make for a busy schedule, Gupton said the two complement one another and inform the way he approaches each.

"Strangely, they are two sides of a similar coin," he said. "When I think about [conducting], you have to be an actor. You have to communicate nonverbally." 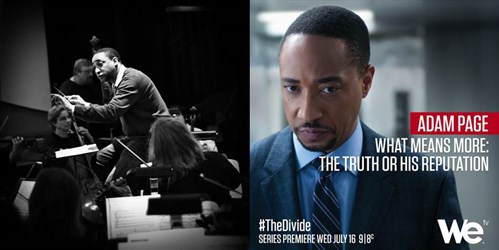 Music, Gupton said, came first in his life. This means he placed what he learned in acting and other fields in that context, often thinking of the verbal rhythms and patterns of Shakespeare, Broadway or film in a musical way.

"I think all actors should study music and all musicians should study acting to explore expressing things on a different level," he said. "These arts require communicating in the highest order and the use of physical emotion and expression is of great importance to me. Anything I can study to help augment these things — dance, masks, comedy — it can only help."

Gupton said he tries to think about demonstrating presence and clarity whether he is on that stage as a conductor or actor. Similarly, the power of a nuanced movement to communicate a big idea is a skill Gupton said he’s learning to apply in both roles.

"Over the years and throughout the body of my work, I think I’m learning to do less, particularly with gestures from the left hand," he said.

In some cases, Gupton finds that pieces of the classical repertoire help him approach a character he is playing. Gupton is currently working on an audition for the role of a man he described as "not a good guy." While he said he doesn’t know whether the character of a Queens-native criminal would have heard the piece, Gupton finds himself humming the funeral march movement of Beethoven’s Third Symphony, "Eroica," as he walks around his New York City home because it helps him unlock the character's mindset.

"I am preparing an audition for a not-so-nice underworld character who is a criminal. Smart, but lethal. And somehow 'Eroica' has been in my head, particularly the second movement," Gupton said. "I have strangely found it setting the tempo and mood of this man who is locked away, without real friends, only dangerous business allegiances. Plodding. Brooding. Weeping from the inside."

For more information on Damon Gupton.

For tickets and information on the BSO’s Star-Spangled Spectacular July 3-4.