The BSO's Got Its Own Music Man 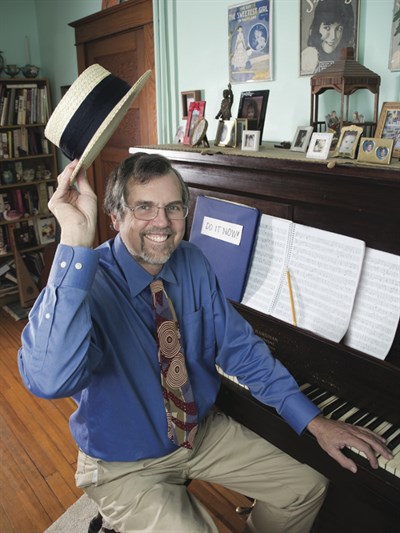 An unsung talent gets its due.

What do the Ravens, former BSO music director Yuri Temirkanov and former Baltimore mayor and Maryland governor William Donald Schaefer all have in common? They have all served as fodder for the musical compositions of BSO bass player Jonathan Jensen.

“As a kid, I was well-known for making up songs,” says Jensen. “I put this love of composing aside for years as I studied bass.”

In 1987, Jensen found a good reason to pick songwriting back up.

“An Italian BSO violist, who happened to be quite a character, was retiring. I got the idea to write a musical ‘roast’ for him to the tune of ‘Funiculì, Funiculà.’ This jumpstarted my unofficial role as musical tribute writer for the BSO.”

Since that debut musical roast, Jensen has written more than 20 song parodies to mark the retirements and birthdays of his BSO colleagues.

"I’ll never forget the goodbye song I composed for [former BSO music director] Yuri Temirkanov. It was written to the tune of I’ve Got Rhythm and was sung in both English and Russian. People from the orchestra even got up to sing and dance.”

Last year, an ode to the Ravens that Jensen penned earned YouTube fame as Baltimore’s other hometown team made its way to the Super Bowl.

“That was so much fun,” says Jensen. “I am not really a football fan and had to take a crash course in the who’s-who of the Ravens players. Luckily, there are enough Ravens fans in the orchestra that it was easy to get up to speed on all things football.”

“I had an idea that Schaefer’s mayoral years would make a great subject for a musical. He is a larger-than-life character who has had a huge impact on the city of Baltimore and beyond.”

With the help of Baltimore playwright Rich Espey, Do It Now began to take shape. The musical includes the hard-hitting title song, inspired by Schaefer’s well-known mantra, and also features big production numbers that spotlight historic moments, such as the seal pool swim, as well as more intimate scenes, like a torch song sung by his longtime companion Hilda Mae Snoops.

The musical has enjoyed two public read-throughs, but Jensen and his team are still exploring production possibilities.

“So many Baltimoreans have fond memories of Schaefer. I think this musical could really be a hit. I didn’t know I had it in me to write this,” says Jensen. “I guess all the songs I’ve created to celebrate unique individuals over the years have prepared me to take on this project.”