For as many centuries as luthiers have crafted the instrument, the fundamental technology behind a violin hasn’t really changed.

However, an Italian designer has created a new violin prototype out of a composite material — that features of all things spider and worm silk — which he hopes might lead to a future where we could customize the acoustics of instruments to the desires of those who play them.

When you deal in a medium like wood, everything from the wood’s density to the structure of the grain can mean the difference between a top rate and sub par violin.

“Wood is an incredibly complex structure,” said Luca Alessandrini. “They are still studying it at Cambridge [to better understand its structure.] It’s really unbelievable.”

There are undoubtedly new tools and science applied to the field of making string instruments, but in large part it is ruled by tradition and craft. Where other instruments are more easily the beneficiaries of new technology or precision manufacturing, there is still a sense that coveted violins made hundreds of years ago by Stradivari or Guarneri retain some lost arcane acoustic artistry that we can never replicate. And again, many of the leading theories into why that is point to any of the many hard-to-control variables inherent to the wood.

“We are using wood mainly because it's been used for centuries,” said Alessandrini.

And Alessandrini should know something about working with wood. His family has designed and built furniture for three generations (what he calls one of those "typically Italian family business.") After his undergraduate studies, Alessandrini worked as a furniture designer for a few years before looking to apply his love of engineering and design with an interest in music. 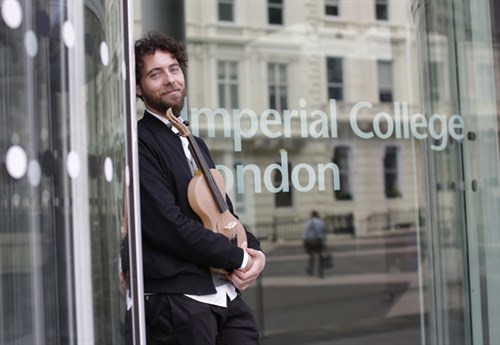 Luca Alessandrini with his violin prototype

Alessandrini began experimenting with plant-based products — everything from flax and hemp to bamboo — looking for a better performing acoustic materials that could be manipulated. Finally, he settled on worm silk because of its propagation velocity, which is a measurement of a material’s elasticity and density that allows it to conduct vibration.

Working with a company that owned a mold used to print carbon fiber violins, Alessandrini created a prototype that used a mixture of worm silk and a composite resin. Looking for feedback, Alessandrini consulted with the Associazione Nazionale Liutai Artistici Italiani, one of the most respected groups of violin-makers in the world. Alessandrini took his prototype to Cremona — a small but almost mythical Italian city for violinists that was the birthplace of Stradivari and is now home to more than 400 luthiers.

“I was expecting more traditional views, but they were very enthusiastic,” Alessandrini said of the luthiers he met with. “They were saying the material was very responsive and very interesting.”

For his second prototype, Alessandrini looked to spider silk. By size and weight, spider silk is one of the strongest natural fibers in the world, five times stronger than steel of the same diameter. But it also is incredibly elastic, moving freely in a breeze and transmitting the vibrations of a trapped insect to the spider. Alessandrini contacted researchers at Oxford University’s zoology department who are studying the material, and they provided him with strands the length of a violin’s body from the golden orb silk-weaver spider.

Using the spider silk to reinforce the design and transmit vibrations across the instrument, Alessandrini produced a second prototype. After another trip to Cremona, he took the prototypes to London where he met with the Grammy-nominated violinist and Royal Academy of Music lecturer, Peter Sheppard Skaerved.

“He spent a couple of hours with the prototype, and he immediately caught on to what I was doing,” Alessandrini said.

Skaerved was impressed enough by the potential of the design that he wrote a review for Alessandrini saying, “I have been working with great violinists my entire career and I have been in discussions with makers and players about the limited capabilities of other manmade materials such as carbon fibre. These have not seemed to offer the organic subtleties of wood. My encounter with the prototype instrument developed by Luca has filled me with excitement. This approach offers a tremendous opportunity to move forward instrument making, using new materials in a way I have long hoped.”

Alessandrini patented the technology in June, but he said he feels that the prototypes are only a start in realizing the potential of this design. Other applications include speaker boxes or amps (Alessandrini has already created a prototype) and acoustic paneling used in theater or concert spaces.

Alessandrini said he’s also been encouraged by some of the luthiers he’s met to apply his design to guitars because of some of the timbre qualities of the silk. But above all else, Alessandrini wants to further explore how this technology allows the sound or qualities of an instrument to be customized to match the desires and personal tastes of the musicians playing them.