Last summer, new BSO Principal Timpanist James Wyman has taken on an interesting project: converting the BSO’s existing set of timpani drums from the American style into the German style. The process requires disassembling, cleaning and reassembling the drums to adjust the orientation of the pedals.

James explains this process and his reasoning behind completing it:

There may be many different styles and schools of playing, but only two systems of timpani setup, with some variations, exist. All timpanists fall into one of two categories: German or American. This refers to the way the drums are constructed and oriented. American timpani are arranged with the largest drum on the left, whereas the German system has the big drum on the right, with all the pedals on the inside of the drum. This creates the issue of using American timpani while they are set up in the German style, because the pedals and tuning gauges are all on the wrong sides. The great majority of timpanists in the U.S. play the American style, but there are a few schools of playing that teach the German system. One is the Cleveland school where I studied, which has permeated its way into many parts of the country.

Most often, drums are manufactured specifically for the required setup rather than being converted later on. In the case of the BSO, they own all American timpani, 16 to be exact, and a new German setup timpanist. It became my project to convert two sets of our 30+ year old drums to be setup backwards. Deconstruction was fairly simple, and enjoyable might I add, however, cleaning each drum proved to be very challenging. The upper parts of the drums were briefly sent to a machinist for some drilling and returned to be put back together. This was where the real challenges came up. Each drum's upper support ring needs to be perfectly in round or the drum will sound a bit off due to tension not being equal. I learned this the hard way after I assembled the first four drums to find them sounding a little off, only to disassemble each again and make sure they were perfect. By the time all eight are finished I will have put in nearly 60 hours of work, which brings up the question...why not just switch to American? Being a right-handed player, I always want to play to the biggest drum with my strong hand but more importantly being a Cleveland-style player is very important to me as it is the style of playing that helped earn me the appointment of this amazing position in your BSO. 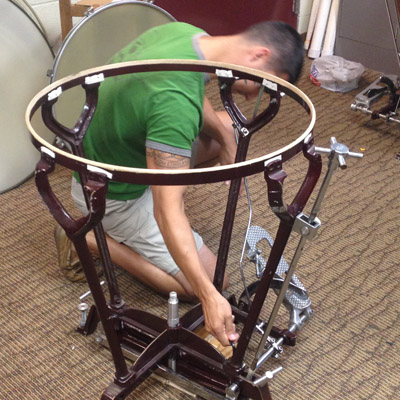 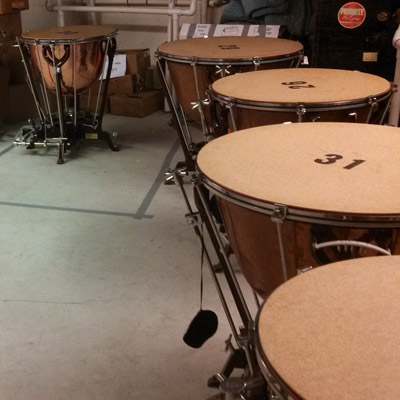