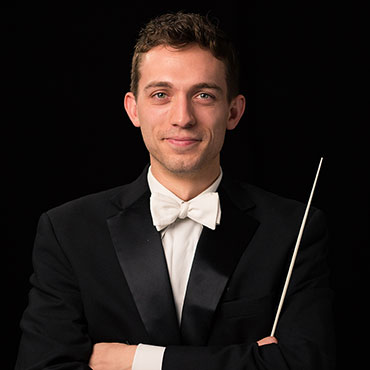 The Baltimore Choral Arts Society, now in its 52nd season, is one of Maryland's premier cultural institutions. The Symphonic Chorus, Full Chorus, Orchestra, and Chamber Chorus perform throughout the mid-Atlantic region, as well as in Washington, D.C., New York, and in Europe.

Conductor and composer Anthony Blake Clark began his first season as Music Director of Baltimore Choral Arts Society this summer. Clark has led ensembles in the United States and Europe, and his compositions have been heard across the country as well as in the UK, and the Czech Republic. He has prepared choruses for Sir John Eliot Gardiner, Simon Halsey, Gijs Leenaars, and Julian Wilkins, for performances with prestigious ensembles including the Berlin Philharmonic and the Berlin Radio Choir. Recently, Clark was the assistant chorus master for the Berlin Philharmonic’s performance of Stravinsky’s “Oedipus Rex” under the baton of Sir John Eliot Gardiner.

A Texas native, Anthony Blake Clark received his Bachelor’s degree in composition and conducting from Baylor University School of Music, and at the age of 21 he co-founded the Texas Baroque Ensemble. Clark completed a Master’s degree in conducting, studying with Simon Halsey and Julian Wilkins at the University of Birmingham, England. Clark was most recently Director of Music and Worship Arts at the Chevy Chase United Methodist Church where he led the Sanctuary Choir, and he was Artistic Director of the Soundings Concert Series. Clark has also served as Artistic Director of St. Maries Musica, a chamber choir in Southern Maryland, as well as having served as Ensemble Director of the Richmond Women’s Chorus.

For the past 21 years, WMAR Television, the ABC network affiliate in Maryland, has featured Choral Arts in an hour-long special, Christmas with Choral Arts, which won an Emmy Award in 2006. The chorus was also featured in a PBS documentary called Jews and Christians: A Journey of Faith, broadcast nationwide, and on National Public Radio’s Special Coverage in the fall of 2001. The ensemble has been featured frequently on The First Art (Public Radio International), Performance Today (National Public Radio) and VOX (XM Radio). In Europe, Choral Arts was featured in a program devoted to the music of Handel broadcast on Radio Suisse Romande. On local radio, Baltimore Choral Arts was featured on Choral Arts Classics, a program on WYPR Radio hosted by Music Director Emeritus Tom Hall that features the Choral Arts Chorus and Orchestra.

In 2010, Choral Arts released Christmas at America’s First Cathedral on Gothic Records, recorded at the Baltimore Basilica, which includes familiar Christmas favorites as well as premieres by Rosephanye Dunn Powell and James Lee, III. A recording with Dave Brubeck, featuring Brubeck’s oratorio, The Gates of Justice, was released internationally on the NAXOS label in 2004; Choral Arts is also featured on Introducing the World of American Jewish Music on Naxos. Choral Arts has two other recordings in current release: Christmas with Choral Arts and a live recording of the Rachmaninoff All-Night Vigil.