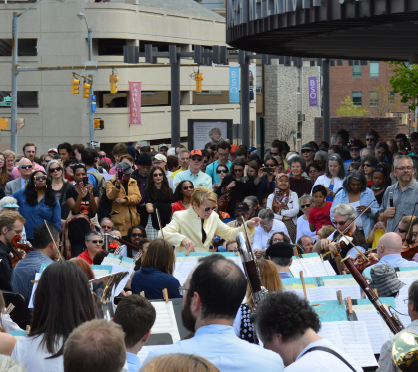 Free Performances – In the Community

In the BSO’s first in-person performances since March 2020, Marin Alsop conducts the BSO in two outdoor community performances that showcase her commitments to new music and living composers alongside powerful favorites.

Outdoor performances will have a limited capacity due to COVID-19 restrictions. Please note these performances will be reservation only with a lottery system. Reservations are now closed for the June 5 performance outside the Joseph Meyerhoff Symphony Hall. Selected patrons will be contacted with more information.

All in-person performances are subject to local public health guidelines.

The grounds of the Music Center at Strathmore.

ANNA CLYNE Restless Oceans
STACY GARROP The Battle for the Ballot
MENDELSSOHN Symphony No. 4 in A Major, op. 90, “Italian”

Alsop conducts works by Anna Clyne and Mendelssohn, as well as Stacy Garrop’s The Battle for the Ballot to honor women’s suffrage with actress and storyteller Maria Broom.